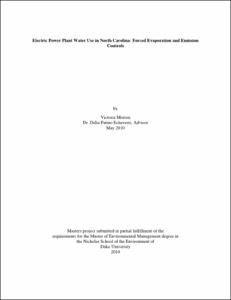 View / Download
1.3 Mb
Date
Author
Morton, Victoria
Advisor
Patino Echeverri, Dalia
Repository Usage Stats
930
views
1,712
downloads
Abstract
The link between water use and electricity generation is very strong and largely omitted from the public policies aimed at sustainable generation of electricity. Electricity is required for treating and pumping water to its destination, and water is required for electricity generation at thermoelectric power plants for cooling purposes, and for the operation of environmental control devices that reduce air emissions. North Carolina is ranked 9th in the United States for electricity total net production, according to the Energy Information Administration. Thermoelectric power freshwater withdrawals far outstrip all other water withdrawal categories; by the year 2000, thermoelectric power freshwater withdrawals were approaching 8,000 million gallons per day, and as the population continues to grow in North Carolina, that number can only be expected to increase. They make some of the largest water withdrawals in the state of North Carolina, but they only consume approximately 3% of the water they intake. The consumptive use percentage of 3% is misleading because it doesn’t take into account forced evaporation. As mentioned previously, power plants require intake water to use for cooling purposes in the electricity generation process. The withdrawn cooling waters, once run through the plant, are returned to rivers/lakes at a higher temperature than the ambient water temperature. This higher temperature water causes additional evaporation (forced evaporation) from the river/lake. Forced evaporation should be of particular concern to North Carolina due to the severe droughts that have occurred in the region in recent history which threaten energy production as well as other water uses (ex. drinking water supply). In this project we find that forced evaporation represents an average 22% increase in power plant water consumption in North Carolina, when compared to water consumption occurring during electricity generation on-site. We also look at the impact that air emission controls have on the plants water consumption. If carbon emissions are required to be controlled in the future, then water use at all power plants will increase, on average, approximately 5%. The water lost to forced evaporation and emissions controls will add additional strain to power plants located in drought prone regions.
Type
Master's project
Department
Nicholas School of the Environment and Earth Sciences
Subject
cooling
CCS
water
forced evaporation
emission controls
scrubber
Permalink
https://hdl.handle.net/10161/2194
Citation
Morton, Victoria (2010). Electric Power Plant Water Use in North Carolina: Forced Evaporation and Emission Controls. Master's project, Duke University. Retrieved from https://hdl.handle.net/10161/2194.
Collections
More Info
Show full item record