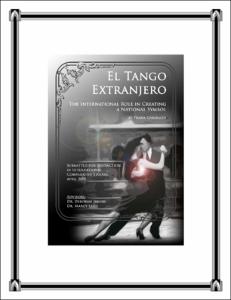 View / Download
1.4 Mb
Date
Author
Garibaldi, Diana
Repository Usage Stats
970
views
6,653
downloads
Abstract
The evolution of the Argentine tango is examined, demonstrating the importance of fragmentation and international influences on its creation and endurance as a national symbol for Argentine identity. It looks at the evolution of the tango chronologically, highlighting important moments in its development both domestically and abroad that have furthered its development and importance culturally and in regards to its relationship with national identity. Specifically, five major periods in tango will be explored: its beginnings; its early travels to Europe; its repatriation to Argentina and the subsequent Golden Years; then its renaissance and endurance abroad, which finally led it back to Argentina for a local renaissance. The current renaissance in Argentina demonstrates the lasting importance of the tango to national identity, as well as the durability of various hybrid forms of the tango. It also shows us that tango has particular transnational characteristics, which enables the tango to leave its borders, only to come back with renewed vitality and popularity. The national symbol therefore, benefits from its international travels and exposure, as it furthers its development and helps the tango endure.
Description
Honors thesis in International Comparative Studies, Spring 2010
Type
Honors thesis
Department
International Comparative Studies
Subject
tango
national identity
hybridism
transnationalism
cultural flows
cultural appropriation
Permalink
https://hdl.handle.net/10161/2253
Citation
Garibaldi, Diana (2010). El Tango Extranjero. Honors thesis, Duke University. Retrieved from https://hdl.handle.net/10161/2253.
Collections
More Info
Show full item record