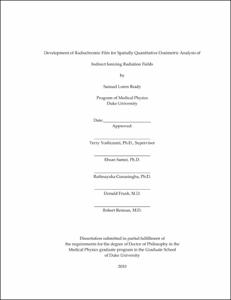 Traditional dosimetric devices are inherently point dose dosimeters (PDDs) and can only measure the magnitude of the radiation exposure; hence, they are one-dimensional (1D). To measure the magnitude and spatial location of dose within a volume either several PDDs must be used at one time, or one PDD must be translated from point-to-point. Using PDDs for spatially distributed, two-dimensional (2D), dosimetry is laborious, time consuming, limited in spatial resolution, susceptible to positioning errors, and the currently accepted approach to measuring dose distribution in 2D. This work seeks to expand the current limits of indirectly ionizing radiation dosimetry by using radiochromic film (RCF) for a high-resolution, accurate dosimetry system. Using RCF will extend the current field of radiation dosimetry to spatially quantitative 2D and three-dimensional (3D) measurements.

This work was generalized into two aims. The first aim was the development of the RCF dosimetry system; it was accomplished by characterizing the film and the readout devices and developing a method to calibrate film response for absolute dose measurements. The second aim was to apply the RCF dosimetry system to three areas of dosimetry that were inherently volumetric and could benefit from multiple dimensional (2D or 3D) dose analysis. These areas were representative of a broad range of radiation energy levels and were: low-mammography, intermediate-computed tomography (CT), and high-radiobiologcal small animal irradiation and cancer patient treatment verification. The application of a single dosimeter over a broad range of energy levels is currently unavailable for most traditional dosimeters, and thus, was used to demonstrate the robustness and flexibility of the RCF dosimetry system.

Two types of RCF were characterized for this work: EBT and XRQA film. Both films were investigated for: radiation interaction with film structure; light interaction with film structure for optimal film readout (densitometry) sensitivity; range of absorbed dose measurements; dependence of film dose measurement response as a function of changing radiation energy; fractionation and dose rate effects on film measurement response; film response sensitivity to ambient factors; and stability of measured film response with time. EBT film was shown to have the following properties: near water equivalent atomic weight (Zeff); dynamic dose range of (10<super>-1</super>-10<super>2</super>) Gy; 3% change in optical density (OD) response for a single exposure level when exposed to radiation energies from (75-18,000) kV; and best digitized using transmission densitometry. XRQA film was shown to have: a Zeff of ~25; a 12 fold increase in sensitivity at lower photon energies for a dynamic dose range of 10-3-100 Gy, a difference of 25% in OD response when comparing 120 kV to 320 kV, and best digitized using reflective densitometry. Both XRQA and EBT films were shown to have: a temporal stability (&#916;OD) of ~1% for t > 24 hr post film exposure for up to ~20 days; a change in dose response of ~0.03 mGy hr-1 when exposed to fluorescent room lighting at standard room temperature and humidity levels; a negligible dose rate and fractionation effect when operated within the optimal dose ranges; and a light wavelength dependence with dose for film readout.

The flat bed scanner was chosen as the primary film digitizer due to its availability, cost, OD range, functionality (transmission and reflection scanning), and digitization speed. As a cost verses functionality comparison, the intrinsic and operational limitations were determined for two flat bed scanners. The EPSON V700 and 10000XL exhibited equal spatial and OD accuracy. The combined precision of both the scanner light sources and CCD sensors measured < 2% and < 7% deviation in pixel light intensities for 50 consecutive scans, respectively. Both scanner light sources were shown to be uniform in transmission and reflection scan modes along the center axis of light source translation. Additionally, RCFs demonstrated a larger dynamic range in pixel light intensities, and to be less sensitive to off axis light inhomogeneity, when scanned in landscape mode (long axis of film parallel with axis of light source translation). The EPSON 10000XL demonstrated slightly better light source/CCD temporal stability and provided a capacity to scan larger film formats at the center of the scanner in landscape mode. However, the EPSON V700 only measured an overall difference in accuracy and precision by 2%, and though smaller in size, at the time of this work, was one sixth the cost of the 10000XL. A scan protocol was developed to maximize RCF digitization accuracy and precision, and a calibration fitting function was developed for RCF absolute dosimetry. The fitting function demonstrated a superior goodness of fit for both RCF types over a large range of absorbed dose levels as compared to the currently accepted function found in literature.

The RCF dosimetry system was applied to three novel areas from which a benefit could be derived for 2D or 3D dosimetric information. The first area was for a 3D dosimetry of a pendant breast in 3D-CT mammography. The novel method of developing a volumetric image of the breast from a CT acquisition technique was empirically measured for its dosimetry and compared to standard dual field digital mammography. The second area was dose reduction in CT for pediatric and adult scan protocols. In this application, novel methodologies were developed to measure 3D organ dosimetry and characterize a dose reduction scan protocol for pediatric and adult body habitus. The third area was in the field of small animal irradiation for radiobiology purposes and cancer patient treatment verification. Two methods for small animal irradiation were analyzed for their dosimetry. The first technique was within a gamma irradiator environment using a <super>137</super>Cs source (663 keV), and the second, a novel approach to mouse irradiation, was developed for fast neutron (10 MeV) irradiated by a Tandem Van de Graff accelerator in a <super>2</super>H(d,n)<super>3</super>He reaction. For the patient cancer treatment, RCF was used to verify a 3D radiochromic plastic, PRESAGETM, using multi-leaf collimation (MLC) on a medical linear accelerator (LINAC) with 6 MV x-rays. The RCF and PRESAGE<super>TM</super> dosimeters were employed to verify a simple respiratory-gated lung treatment for a small nodule; the film was considered the gold standard. In every case, the RCF dosimetry system was verified for accuracy using a traditional PDD as the golden standard. When considering all areas of radiation energy applications, the RCF dosimetry system agreed to better than 7% of the golden standard, and in some cases within better than 1%. In many instances, this work provided vital dosimetric information that otherwise was not captured using the PDD in similar geometry. This work demonstrates the need for RCF to more accurately measure volumetric dose.