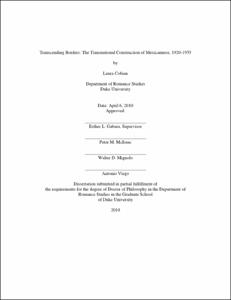 My dissertation, <&ldquo;>Transcending Borders: The Transnational Construction of Mexicanness, 1920-1935,<&rdquo;> examines the conflicting attitudes towards "Mexicanness" or <italic>mexicanidad</italic> both in Mexico and the United States, an area that, Jos<&eacute;> Lim<&oacute;>n, conceptualizes as "Greater Mexico." Beginning with an analysis of the Mexican postrevolutionary state's construction of nationalist culture, I argue that the transnational invention of Mexicanness through the circulation of the Aztec artifact reveals the possibilities for people of Mexican descent to reclaim public space and cultural citizenship on both sides of the U.S.-Mexico border. I examine the construction of Mexicanness through an analysis of the limitations of Mexican post-revolutionary literary production in generating a clear vision of Mexican nationhood as well as the possibilities for nation building offered by public spaces such as the museum and the monument (an outdoor museum). Tracing the cultural manifestations of Mexican nationhood as expressed by the state and by people of Mexican descent is essential to understanding how the nation is practiced and thus intimately intertwined with the practice of citizenship. Through an interdisciplinary analysis of the Aztec artifact's various incarnations as an archaeological artifact, created artifact, and spurious artifact, I contend that the artifact represents an alternative text for the study of nationalism in its ability to narrate a national identity ultimately shaped beyond Mexico's geographical borders.