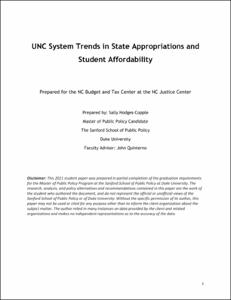 View / Download
670.5 Kb
Date
Author
Hodges-Copple, Sally
Advisor
Quinterno, John
Repository Usage Stats
122
views
100
downloads
Abstract
Extensive academic and policy research has documented a nationwide trend of declining state support for higher education, particularly during recessionary periods. A review of the existing literature shows that North Carolina has paralleled national trends in shifting the responsibility for funding public higher education away from society as a whole – via the appropriation of tax dollars – and toward individual students and families in the form of tuition and fee payments. As schools receive fewer public resources, they are forced to either cut spending or increase revenue via others means; research regarding the impact of spending cuts and tuition increases on student outcomes indicates that both are detrimental. Given North Carolina's comparatively low university tuition rates relative to other states, some observers have touted the affordability of the state’s public institutions and downplayed the relevance of national trends to the North Carolinian context. To the contrary, this report finds that state appropriations per full-time equivalent student in 2017, the most recent year with complete data, were at their lowest level in North Carolina since 1995. While declines occurred during recessionary periods, the recovery in state support during expansionary periods is taking longer and longer. Students – particularly those from families that have borne the brunt of income stagnation and have been historically shut out from wealth-building opportunities – are increasingly expected to pay out-of-pocket from limited family resources or take on substantial amounts of debt to finance their education. In particular, four key findings have emerged from this study: 1) Appropriations per FTE in 2017 were at their lowest level since 1995 and are taking increasingly longer to recover following economic downturns: The expansionary period following the 2008 recession defied a previous pattern in which higher education funding in North Carolina would decline during recessions only to subsequently recover during expansions. Even as the economy grew from 2010 to 2017, appropriations per FTE fell 9 percent, or $1,509, dropping to $14,928 from $16,437. Far from recovering during a time of economic growth, appropriations per FTE in the UNC System were 15 percent lower in 2017 than at their pre-recession peak in 2007. 2) Tuition revenue is steadily replacing state dollars in UNC System funding: In 2017, North Carolina appropriated just $1.71 per FTE for every $1 in net tuition revenue per FTE. This appropriations-net tuition ratio has declined 50 percent since 2001, when the state appropriated $3.41 per FTE for every $1 in net tuition revenue per FTE. Based on this shift in the relative burden, higher education in North Carolina is on track to become a primarily individual investment that is partially subsidized by the state. 3) Students from lowest income families experienced the greatest hike in out-of-pocket costs: The best available data points to concerning distributional impacts of the above two trends: North Carolina's lowest-income families – those least able to absorb the shift away from state-funded higher education – are precisely the families who have experienced the greatest percentage increase in net price over the last decade. From 2008 to 2017, the UNC System’s lowest-income students experienced a net price increase of over 100 percent, while its highest-income students experience a net price increase of 25 percent. 4) Increased reliance on student loans and disparities across UNC campuses reflect the legacy of NC’s income and wealth gaps: Since 1999 – the first year in which data is available – UNC System students have increasingly turned to student loans to finance the cost of public higher education. The portion of UNC System students who took out student loans rose from 40 percent in 1999 to 56 percent in 2018. Persistent disparities emerge between the state’s Minority Serving Institutions (MSIs) and other campuses. The portion of students receiving loans increased from 55 percent in 1999 to 77 percent in 2018 at MSIs. At non-MSI campuses, meanwhile, just 36 percent of students received student loans in 1999, a figure that rose to 51 percent of students in 2018. As North Carolina families begin to heal from the dual crises of the COVID-19 pandemic and the associated economic recession, state leaders will confront important budget decisions influencing the trajectory of the state’s recovery. While state revenue collections are exceeding worst-case projections, costs – especially in higher education – have risen as well, while other streams of revenues have declined. A post-COVID-19 response that continues to shift burdens onto students may be particularly concerning for students who are less able to absorb these increased costs due to familial job and income losses stemming from the pandemic. Today, North Carolina has the opportunity to more closely examine its historical commitment of state dollars to UNC System students relative to its levels of present-day investment in a student body that is more racially, ethnically, and socioeconomically diverse than any generation before it.
Type
Master's project
Department
The Sanford School of Public Policy
Subject
Higher education
student debt
tuition
University of North Carolina
state appropriations
Permalink
https://hdl.handle.net/10161/22918
Citation
Hodges-Copple, Sally (2021). UNC System Trends in State Appropriations and Student Affordability. Master's project, Duke University. Retrieved from https://hdl.handle.net/10161/22918.
Collections
More Info
Show full item record