Addressing the "Elephant in the Room": Rumor Rebuttal in China during the COVID-19 Outbreak 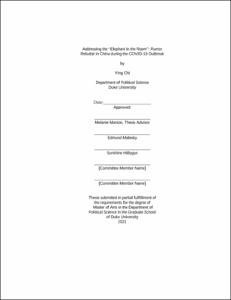 This study aims to explain the logic behind rumor rebuttal, a form of responsivepropaganda, in authoritarian countries during COVID-19, the story of which initially unfolded as ”rumor”. Taking China at the beginning stage of the outbreak as an example, I generate an original data of unverified and undesirable information on social media set, by combining both refuted and censored posts through keyword matching. I find that when faced with a dilemma between being responsive to the social need of accurate information to control the pandemic and securing authoritarian rule by not repeating rumor so as to increase its spreading power, the Chinese government chooses to refute rumors that have no political implications. When refuting rumors with political implications, censorship is also adopted. This study contributes to an understudying of information politics in authoritarian regimes. I analyze how an authoritarian government carries out a campaign against undesirable information using multiple techniques simultaneously, and I make a clear distinction between rumor content and political implications, which is noted in the literature but has not been used to understand authoritarian government communication behavior so far.