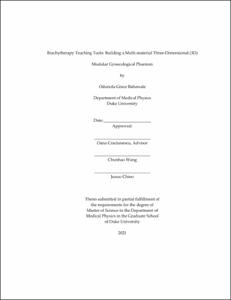 In recent years, there has been a decline in the use of brachytherapy for the treatment of several cancers. One of the several reasons attributed to this is the unease in implementing the procedures at the initial stage of the practice due to limited practice. These procedures are performed by the radiation oncologist that acquire their training during their residency. Although the period of residency exposes them to the various steps of the procedure by observing treatments of patients with different pathologies, it is evident that being able to simulate these skills on a phantom will be an added advantage. Specifically, due to the complex nature of the HDR procedure for cervical brachytherapy, it requires to a great extent exposure to hands-on training. This requirement established the need to develop a modular phantom with which various intracavitary and/or interstitial HDR GYN brachytherapy procedures will be done became apparent. To address this need, a brachytherapy prototype kit was designed by our group1. This kit was specifically designed to focus on High-Dose Rate (HDR) cervical cancer therapy. The treatment involves the use of applicators such as tandem and ovoids and/or needles. Dimensional and pathological variability were investigated by performing a 50-patient study after which a kit was designed that comprised of a vaginal canal, uteri (small, average, and large), High-Risk Clinical Target Volumes (HRCTV) and organs of interest (rectum and bladder). Upon the completion of the prototype kit, some limitations became apparent. The width of the vaginal canal was not wide enough to accommodate the various sizes of the ovoid caps. In addition, the original design incorporated the training kit in a small box hence making its use a bit challenging l. These limitations led to the designing of an improved modular training phantom. The goal of this project is to construct a modular brachytherapy phantom by integrating an improved version of the prototype kit with an existing gynecologic phantom, Gaumard (S400.100). First, we investigated the feasibility of integrating the existing phantom with our in-house kit. This was done by acquiring Computed Tomography (CT) images of the existing GYN phantom and contouring out a model using the 3D Slicer 4.10.2 application. Following this, parts from the initial kit were evaluated with respect to potential location in the existing phantom as well as general fit. The next step was to design new parts of the modular training kit and integrate them with the existing gynecologic phantom. The main part was the pelvic insert which comprised a combination of the vaginal canal and the pelvic floor. This newly designed anatomical part was printed in multi-material Agilus with a shore value of 30A. In addition, a frame was built to secure the training kit in the phantom. The modular connectivity of the uterus to the cervix of the vaginal canal had to be re-designed. The peg locking mechanism used in the prototype had a limitation. The uterus had to be Boolean subtracted from the cervix of the vaginal canal and this hole was the connecting point of the vaginal canal to the uterus. The peg was then used to keep both parts together. However, the size of the large uterus made it difficult to perform the Boolean subtraction as the cervix area was too small. This led to the designing of a new locking mechanism using flanges. The modular phantom was evaluated by a radiation oncology resident to assess usability and ease of use. The feedback is a resource in improving the phantom to fit their training needs. In conclusion, the brachytherapy modular phantom was built by integrating our in-house brachytherapy prototype kit with the GYN phantom.