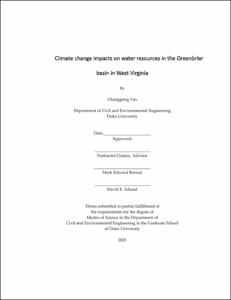 This paper investigates climate change impact on the water resources in the Greenbrier basin using a distributed hydrological model VIC and future climate series. The GCM outputs under the SRES A2 greenhouse gas emission scenario is downscaled and bias-corrected by the BCCAQ method to obtain the future climate series. The VIC model performance is satisfactory with the Nash–Sutcliffe efficiency coefficient (NSE) of 0.62 and 0.58 in calibration and validation periods. The bias-corrected precipitation and temperature indicate a warmer and more humid climate with precipitation and temperature increase by 14% and 1.8°C in the future. Under climate change background, the mean annual cycles of water balance components keep similar seasonal fluctuation but have larger magnitudes in the future. The discharge in the future also has close monthly distribution with that in the historical observations. The results show that the future discharge is larger than historical observation, implying water resources would be more abundant in summer from 2046 to 2065. The hydrological simulations in the Greenbrier basin have a system error of underestimating the peak flows, and the extreme discharge would be larger and more frequent in the mid of 21st century.