Lethal Autonomous Weapon Systems: Reconciling the Myth of Killer Robots and the Reality of the Modern Battlefield 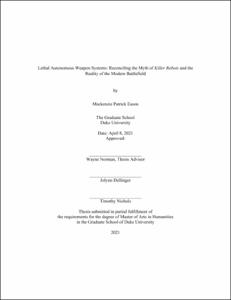 In the past two decades there has been a significant interest in the ethical and legal concerns surrounding the development of Lethal Autonomous Weapon Systems (LAWS). These arguments are principally based on a killer robot conception of future autonomy - that is that futuristic LAWS are capable of near-human like moral reasoning and judgement. My argument is twofold – first, I argue that this conception of future weapon autonomy might be flawed, and future LAWS technology might be better understood as existing on a continuum of weapons autonomy. Machine guns, precision guided missiles, remote piloted drones, and the Aegis Combat System, among others, represent this continuum. While successive technological development might introduce greater levels of autonomy to the battlefield, critical human functions of moral reasoning and judgement are still a necessary and critical component of their design. In this framework, LAWS can be reduced to just another weapon ultimately put to use by human soldiers and commanders. Understood in this way it becomes difficult for critical arguments to hold much force as they must define at what point on this continuum that autonomy meaningfully represents a paradigm shift in warfare to the point that it violates just war norms and international law. Second, I will argue that even if we do assume a killer robot level of autonomy, the utilitarian arguments against LAWS might still be flawed. The arguments rely on the notion that a LAWS could potentially make a mistake and cause unnecessary harm on the battlefield. This notion is flawed because it fails to articulate how that is meaningfully different than a battlefield characterized by human warfare. Humans are also subject to mistakes and error in judgement that could result in unnecessary harm. With that in mind, I will specifically address four of the most prominent utilitarian arguments against LAWS – responsibility gap, proportionality, distinction, and the idea of ‘riskless warfare’.