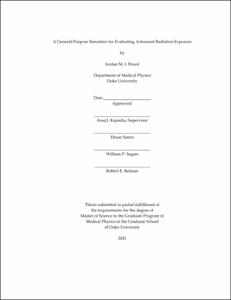 Methods: Galactic cosmic radiation spectra as a function of time and radial distance from the Sun were modeled using the Badhwar-O’Neill 2020 model, while the Van Allen belt spectra were modeled using the AE-8/AP-8 models, and solar particle event spectra could be selected from historical data. The magnetic field input to the AE-8/AP-8 model was generated using the 13th generation International Geomagnetic Reference Field. Planetary atmospheres were modeled using NASA Global Reference Atmospheric Models, which provide mean atmospheric data for any altitude, latitude, longitude, and time, and the effect of Earth’s magnetic field was accounted for using a geomagnetic cutoff rigidity algorithm. Planetary orbits, trajectories, and relative positions of objects in the Solar System were determined using the NAIF SPICE observation geometry information system. Finally, highly detailed extended cardiac-torso (XCAT) digital phantoms were integrated into EVEREST in order to accurately model radiation exposure to individual organs. XCAT phantoms model over 100 segmented structures, range in age from neonate to 78 years, and cover various combinations of height, weight, and BMI. The EVEREST framework itself was designed using a novel lookup table method, in which different stages of particle propagation were divided into separate simulations, which are then convolved in post-processing.

Results: EVEREST was validated against personal radiation dosimeter data collected by the lunar module pilot on the Apollo 15 mission and also flux data from the Mars Science Laboratory Radiation Assessment Detector (RAD). Simulation results were found to agree very well with dosimeter readings by the Apollo 15 command module pilot. Comparison of Martian surface particle fluxes simulated by EVEREST to RAD data demonstrated an agreement to within an order of magnitude, with the best agreement seen for protons, He4, Z=6-8, Z=14-24, and Z>24. Finally, as a proof of concept, EVEREST was used to evaluate radiation exposure to a population of eight XCAT phantoms (3 adult and 1 pediatric, male and female) under three different nominal shielding configurations on the surface of Mars (unshielded, 50 cm thick ice, and 50 cm thick Martian regolith) at four different timepoints during the day (12 am, 6 am, 12 pm, and 6 pm). Using the federal yearly occupational dose limit of 50 mSv (effective dose) as a metric, it was found that the phantoms evaluated would reach this limit within 70.9 – 83.8 days unshielded, 139.2 – 161.2 days with 50 cm ice shielding, and 188.1 – 235.7 days with 50 cm Martian regolith shielding, if terrestrial radiation protection standards were to be applied. The results revealed that the brain receives one of the highest organ doses in the body and that unshielded radiation exposure is lowest at midnight when analyzed across all phantoms. Based on these findings, it is recommended that extra care be taken to provide additional radiation shielding in astronauts’ helmets and that extended forays outside of the habitat be planned for late evening to reduce the biological impact of radiation exposure.

Conclusion: EVEREST is a tested and validated framework for accurate estimation of total body and organ dose in space. EVEREST’s geometric versatility makes it ideal for evaluating doses to diverse populations of XCAT phantoms within different types of planetary habitats and spacecraft, enabling optimization of mission planning with respect to radiation exposure in the near future. The model has currently been validated for Lunar and Martian missions, and the framework can be applied to any space travel mission or planetary mission where the atmospheric models for that planet are available.