The Decline of the Southern Resident Population of Killer Whales: A Two-Part Analysis 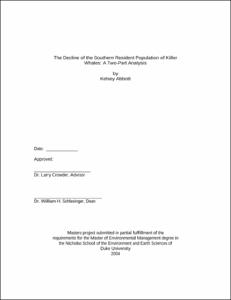 View / Download
264.5 Kb
Date
Author
Abbott, Kelsey
Advisor
Crowder, Larry B
Repository Usage Stats
1,705
views
534
downloads
Abstract
The southern resident population of killer whales declined dramatically in the late 1990s. The number of animals in the population dropped from 97 in 1996 to 78 in 2001, a 20% decline in just five years. Although the reasons for this decline are unknown, external factors such as contaminant exposure, vessel interference, and low prey availability may contribute to the poor health and eventual mortality of the animals. My analysis examines two trends in southern resident mortality. Part 1 uses the percentage of mature males in a population as a surrogate for adult survival and compares the percentage of mature males in the southern resident population versus that of other populations of killer whales. My results indicate that the proportion of the southern resident population that is adult males is significantly lower than the percentage of adult males in the fourteen other populations sampled. I speculate that the high contaminant levels and increased nutritional stress of southern resident males led to this male-biased mortality. In the second part, I develop a method for visually assessing killer whale body condition using photographs. Through 30 years of study, ten southern residents died as a result of emaciation. Of these, two individuals were characterized as “extremely thin” prior to death and four were described as “very thin.” Preliminary results indicate that conditions described as worse than “thin” predict mortality. However, body condition of all members of the population fluctuates over time, suggesting that some population-wide factor such as prey availability may influence body condition. Both of these techniques enable managers to track changes in the population over time, thus advancing our understanding of the fluctuating population dynamics of the southern resident community.
Type
Master's project
Department
Nicholas School of the Environment and Earth Sciences
Subject
Killer whale (Orcinus orca)
Population Decline
Visual Assessment
Permalink
https://hdl.handle.net/10161/235
Citation
Abbott, Kelsey (2004). The Decline of the Southern Resident Population of Killer Whales: A Two-Part Analysis. Master's project, Duke University. Retrieved from https://hdl.handle.net/10161/235.
Collections
More Info
Show full item record