The Paris Commune in Shanghai: The Masses, the State, and Dynamics of `Continuous Revolution' 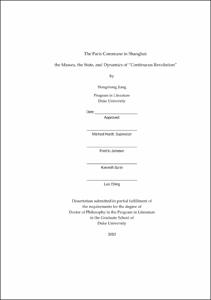 In 1871, during the Franco-Prussian War, the Parisian workers revolted against the bourgeois government and established the Paris Commune. Extolling it as the first workers' government, classical Marxist writers took it as an exemplary--though embryonic-- model of the dictatorship of the proletariat. The principles of the Paris Commune, according to Marx, lay in that "the working class cannot simply lay hold of the ready-made state machinery, and wield it for its own purposes." General elections and the abolishment of a standing army were regarded by classical Marxist writers as defining features of the organ of power established in the Paris Commune. After the defeat of the Paris Commune, the Marxist interpretation of the Commune was widely propagated throughout the world, including in China.

20th century China has been rich with experiences of Commune-type theories and practices. At the end of 1966 and the beginning of 1967, inspired by the Maoist theory of continuous revolution and the vision of a Commune-type state structure, the rebel workers in Shanghai, together with rebellious students and revolutionary party cadres and leaders, took the bold initiative to overthrow the old power structure from below. On Feb.5, 1967, the Shanghai workers established the Shanghai Commune modeled upon the Paris Commune. This became known as the January Storm. After Mao's death in 1976, the communist party and government in China has rewritten history, attacking the Cultural Revolution. And the Shanghai Commune has barely been mentioned in China, let alone careful evaluation and in-depth study. This dissertation attempts to recover this lost yet crucial history by exploring in historical detail the origin, development and supersession of the Shanghai Commune. Examining the role of different mass organizations during the January Storm in Shanghai, I attempt to offer a full picture of the Maoist mass movement based on the theory of continuous revolution. Disagreeing with some critics' arguments that the Shanghai Commune was a negation of the party-state, I argue that it neither negated the party nor the state. Instead, the Shanghai Commune embodied the seeds of a novel state structure that empowers the masses by relegating some of the state power to mass representatives and mass organs. Differing from the common narrative and most scholarship in the post-Mao era, I argue that the commune movement in the beginning of 1967 facilitated revolutionary changes in Chinese society and state structure. The Shanghai Commune and the Shanghai Revolutionary Committee developed as ruling bodies that did not hold general elections or abolish the standing army and in this way did not replicate the Paris Commune. But in contrast to the old Shanghai organs of power, they were largely in conformity with the principles of the Paris Commune by smashing the Old and establishing the New. Some of their creative measures, "socialist new things", anticipated the features of a communal state -a state that does not eradicate class struggle yet begins to initiate the long process of the withering away of the state itself.