Transports of imagination: poetry and the rehabilitation of experience, 1830–1860 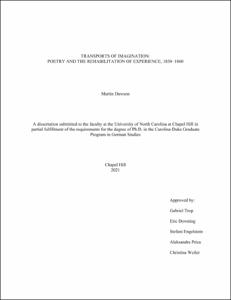 View / Download
1.0 Mb
Date
Author
Dawson, Martin
Advisors
Trop, Gabriel
Downing, Eric
Engelstein, Stefani
Weiler, Christina
Prica, Aleksandra
Repository Usage Stats
93
views
217
downloads
Abstract
This dissertation examines how poets of the German late romantic and restoration periods between 1830 and 1860 disrupt the systematizing drive of technological, cultural, and industrial advancements during the nineteenth century in Germany by establishing connections with the past: both a large-scale geological past and discrete historical moments. My dissertation focuses on the lyric works of Joseph von Eichendorff, Annette von Droste-Hülshoff, and Eduard Mörike. Often read as nostalgic, quietist, or political conservatives, I argue that their works enact in their readers an experiential, temporal expansion in contact with modes of "pastness" that can in turn serve as a normative standpoint of critique and explore alternative forms of experience. The first chapter examines how Eichendorff’s transformative poetic practice that at once emphasizes the disruptive and connective potential of acts of "transcription." Transcription involves writing that crosses boundaries: from nature to text (in lyric); from life to text (in autobiography); or from text to text (in translation). In these different domains, I show how Eichendorff' creates texts that at once transcend the life and context of their creator and bear his unmistakable character. The second chapter locates in Droste-Hülshoff’s lyric works what I call uncanny animation, an imaginative strangeness that repurposes the contemporaneous technical advancements of the daguerreotype and the railway in order to disrupt their respective logics of reproducibility and temporal acceleration. In her lyric works, Droste-Hülshoff disrupts the tight fit between subject and technology to reincorporate the reader into a more imaginatively expansive world. She performs an analogous operation in lyric works that focus on more abject aspects of nature—dust, earth, and bones, for example—which are animated in order to challenge dominant patterns of intelligibility. In the final chapter, I show how Mörike mobilizes play as an aesthetic operation responding to the temporally inflected traumas of modernity that prioritize the present's relentless drive to produce a future. I argue that Mörike develops a concept of poetic play with forms in which the past is conserved—such as the fossil and the elegy—to loosen potentially constraining frameworks of time, space, and genre associated with industrialization and modernization.
Type
Dissertation
Department
German Studies
Subject
German poetry--History and criticism
Lyric poetry--History and criticism
Permalink
https://hdl.handle.net/10161/23587
Citation
Dawson, Martin (2021). Transports of imagination: poetry and the rehabilitation of experience, 1830–1860. Dissertation, Duke University. Retrieved from https://hdl.handle.net/10161/23587.
Collections
More Info
Show full item record