Outgroup Similarity as a Source of Cognitive Dissonance: An Investigation of the Turncoat Effect 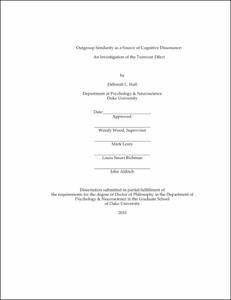 A long tradition of social psychological research suggests that perceptions of similarity and common ground can promote more harmonious relations among otherwise diverse social groups. Yet perceived similarity with and empathy for members of an outgroup can also intensify intergroup bias by threatening the positive distinctiveness of one's group. In the present research, cognitive dissonance theory is used as a framework for understanding how people experience and react to similarity with members of a rival outgroup and for clarifying the conditions under which outgroup similarity reduces or intensifies intergroup prejudice. Four studies tested the hypothesis that outgroup similarity elicits subjective feelings of cognitive dissonance, including psychological discomfort and negative self-evaluation. Study 1 was a pilot test in which similarity to an outgroup member was associated with negative self-evaluation but not psychological discomfort. Study 2 strengthened the interpretation of the turncoat effect as cognitive dissonance by demonstrating that the effect varies as a function of a classic dissonance moderator--perceived choice. Participants induced to experience outgroup similarity reported psychological discomfort and negative self-evaluation, but only when they believed their feelings of similarity resulted from a high degree of personal choice. Study 3 identified strength of ingroup identification as another key moderator of the effect: Only participants who were highly identified with their ingroup reported feelings of dissonance after an induction of outgroup similarity. Finally, Study 4 investigated the implications of three dissonance reduction strategies for intergroup prejudice.