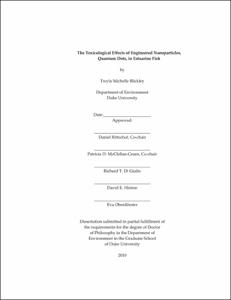 Engineered nanoparticles (ENPs) are a part of everyday life. They are incorporated into a wide array of products including sunscreens, clothing, electronics, paints, and automobiles. One particular type of ENP, quantum dots (QDs), are fluorescent semi&ndash;conducting nanocrystals, and are touted as the next generation of medical tracers and energy&ndash;efficient light bulbs. The continued development and expansion of commercial applications for QDs ensure that they will enter the aquatic environment following manufacture, use, and disposal. Unfortunately, very little information exists on the bioavailability and sub&ndash;lethal toxicological effects of QDs in aquatic organisms. The studies described in this dissertation focused on determining the toxicological effects of Lecithin&ndash;encapsulated CdSe/ZnS quantum dots in larval and adult <italic>Fundulus heteroclitus</italic> (the mummichog).

Quantum dot dispersion is greatly influenced by environmental parameters such as pH, natural organic matter concentration, and ionic strength. Lecithin&ndash;encapsulated core&ndash;shell QDs aggregated and precipitated from suspension in 20 ppt seawater. QD aggregates adhered to the exterior chorion of <italic>Fundulus</italic> embryos in aqueous embryo exposures, but did not traverse the chorion and deposit into the body of the fry. Incidences of developmental abnormalities increased and hatching rates declined in embryos exposed to the highest concentration tested (100 &mu;g/ml).

Dietary assessments showed that QDs were bioavailable to adult <italic>Fundulus</italic>. While QDs or their degradation products traversed the intestinal epithelial and were deposited to the liver, less than 0.01% of the cadmium from the QDs was retained in the liver and intestinal tissues. QD uptake did not cause significant changes in hepatic total glutathione or lipid peroxidation levels, nor did it statistically alter the expression of genes involved in metal metabolism and oxidative stress&mdash;metallothionein, glutathione&ndash;s&ndash;transferase, glutathione peroxidase, and superoxide dismutases. There was, however, a clear gender&ndash;specific trend in the level of Cu/Zn&ndash;superoxide dismutase transcription. In addition, QDs did impact fecundity presumably by feminizing male fish. Vitellogenin transcription was elevated and relative gonad size reduced in male <italic>Fundulus</italic> consuming 10 &mu;g QD per day. Lastly, QDs or their degradation products were maternally transferred to the eggs following six to eight weeks of parental exposure, thus posing a risk to <italic>Fundulus</italic> progeny. Based on the results of these studies, it is apparent that chronic exposure to QDs could result in adverse affects in teleosts and other organisms inhabiting estuarine environments.