Divided by Faith: The Protestant Doctrine of Justification and the Confessionalization of Biblical Exegesis 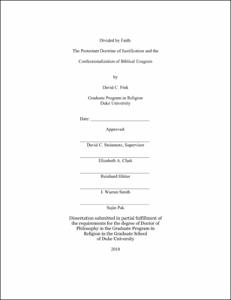 This dissertation lays the groundwork for a reevaluation of early Protestant understandings of salvation in the sixteenth century by tracing the emergence of the confessional formulation of the doctrine of justification by faith from the perspective of the history of biblical interpretation. In the Introduction, the author argues that the diversity of first-generation evangelical and Protestant teaching on justification has been widely underestimated. Through a close comparison of first- and second-generation confessional statements in the Reformation period, the author seeks to establish that consensus on this issue developed slowly over the course over a period of roughly thirty years, from the adoption of a common rhetoric of dissent aimed at critiquing the regnant Catholic orthopraxy of salvation in the 1520's and 1530's, to the emergence of a common theological culture in the 1540's and beyond. With the emergence of this new theological culture, an increasingly precise set of definitions were employed, not only to explicate the new Protestant gospel more fully, but also to highlight areas of divergence with traditional Catholic teaching.

With this groundwork in place, the author then examines the development of several key concepts in the emergence of the confessional doctrine of justification through the lens of biblical interpretation. Focusing on two highly contested chapters in Paul's epistle to the Romans, the author demonstrates that early evangelical and Protestant biblical exegesis varied widely in its aims, motivations, and in its appropriation of patristic and medieval interpretations. Chapter 1 consists of a survey of pre-Reformation exegesis of the first half of Rom 2, and the author demonstrates that this text had traditionally been interpreted as pointing to an eschatological final judgment in which the Christian would be declared righteous (i.e., "justified") in accord with, but not directly on the basis of, a life of good deeds. In Chapter 2, the author demonstrates that early evangelical exegetes broke away from this consensus, but did so slowly. Several early Protestant interpreters continued, throughout the 1520's and 1530's, to view this text within a traditional frame of interpretation supplied by Origen and Augustine, and only with Philipp Melanchthon's development of a rhetorical-critical approach to the text were Protestants able to overcome the traditional reading and so neutralize the first half of Rom 2 as a barrier to the emerging doctrine of justification by faith alone.

Chapters 3, 4, and 5 all deal with the reception history of what is arguably the central text in the Reformation debates concerning justification by faith, Rom 3. Chapter 3 turns once more to patristic and medieval interpretation, and here it is argued that that two major strands of interpretation dominated pre-Reformation exegesis. A "minority view" contrasted justification with works of the ceremonial law, arguing that Paul's assertion of justification "apart from works of the law" was aimed at highlighting the insufficiency of the Jewish ceremonial law in contrast with the sacraments of the Catholic church. In contrast with this view, the "majority view" (arising again from Origen and Augustine) argued that the contrast was properly viewed as one between justification and works of the moral law, thus throwing into sharp relief the problem of justification in relation to good works. This tradition generally followed Augustine in drawing a contrast between works of the law performed prior to, and following upon, the initiation of justification as a life-long process of transformation by grace, but at the same time insisted that this process ultimately issued in the believer fulfilling the demands of the moral law. In Chapter 4, I turn to Luther's early exegesis of Rom 3, as seen in his lectures from 1515. In contrast with Luther's own description of his "Reformation breakthrough" later in life, I argue that Luther did not arrive at his new understanding of justification in a flash of inspiration inspired by Augustine; rather, his early treatment of Romans is unimpeachably Catholic and unmistakably Augustinian, although there are indications even in this early work that Luther is not entirely satisfied with Augustine's view. In Chapter 5, I consider the ways in which Luther's followers develop his critique of the Augustinian reading of justification in the first generation of the Reformation. Throughout this period, it was unclear whether Protestant exegesis of Paul would resolve itself into a repristinization of patristic theology, inspired in large part by Augustine, or whether it would develop into something genuinely new. The key turning point, I argue, came in the early 1530's with Melanchthon's rejection of Augustine's transformative model of justification, and his adoption in its place of a strictly forensic construal of Paul's key terms. Many of Melanchthon's fellow reformers continued to operate within an Augustinian framework, however as Melanchthon's terms passed into wider acceptance in Protestant exegesis, it became increasingly apparent that the Protestant reading of Paul could not ultimately be reconciled with patristic accounts of justification.