Reduction of HIV-virion Transport for Prevention of HIV Transmission 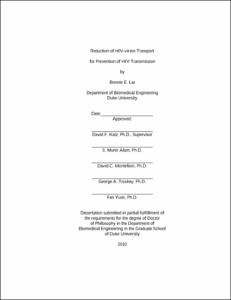 This dissertation explores strategies for reducing HIV-virion transport to mucosal surfaces to prevent HIV infection. Infection requires contact between HIV and an infectable cell, so any means of inhibiting this step could contribute to HIV prevention. Our goals were to quantify the effects of strategies that reduce transport of HIV virions and to evaluate them in the context of HIV prevention. We used fundamental transport theory to design two basic strategies: (1) modifying the effective radius of virions; and (2) modifying the native medium through which virions diffuse. We proposed to implement these strategies using (1) anti-HIV antibodies that would bind and aggregate virions and (2) topically-applied semi-solid gels that coat vaginal epithelial surfaces.

We proceeded to evaluate the potential for semi-solid gels to prevent HIV transmission at mucosal surfaces. From previous experiments in our lab that characterized the topical deployment of vaginal gels <italic>in vivo</italic>, we know that vaginal gels form an uneven coating on the epithelium with gel layer thicknesses of the order of hundreds of microns. Thus, we determined whether semi-solid gels could function as physical barriers to HIV when deployed as thin, incomplete layers on the epithelium.

We developed an experimental system to test the barrier functioning of thin gel layers. We applied thin gel layers to the porous membrane of a Transwell system, and added a solution of HIV to the top compartment. After incubation, samples were assayed for levels of HIV. We found that thin gel layers reduced levels of HIV in the bottom compartment compared to controls where no gel had been applied: There was a log reduction in levels of HIV in conditions where gel layers of approximately 150 &mu;m thickness had been applied to the membrane after 0-, 4-, and 8-hour incubation. Thus, it appears possible for gel layers of thicknesses found <italic>in vivo</italic> to function as physical barriers to HIV over biologically-relevant time scales.

We studied how nonuniform deployment of semi-solid gels affects accumulation of virions in tissue using a mathematical model. We used transport theory to develop a model of HIV diffusing from semen, through gel layers where present, to tissue. Our findings suggest that comprehensive coating of over 80% of the tissue surface area and gel layer thicknesses over 100 &mu;m are crucial to the barrier functioning of topical gels. Under these conditions, the level of viral restriction makes a significant contribution to increasing the time required for virions to reach tissue.