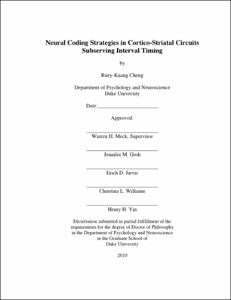 Interval timing, defined as timing and time perception in the seconds-to-minutes range, is a higher-order cognitive function that has been shown to be critically dependent upon cortico-striatal circuits in the brain. However, our understanding of how different neuronal subtypes within these circuits cooperate to subserve interval timing remains elusive. The present study was designed to investigate this issue by focusing on the spike waveforms of neurons and their synchronous firing patterns with local field potentials (LFPs) recorded from cortico-striatal circuits while rats were performing two standard interval-timing tasks. Experiment 1 demonstrated that neurons in cortico-striatal circuits can be classified into 4 different clusters based on their distinct spike waveforms and behavioral correlates. These distinct neuronal populations were shown to be differentially involved in timing and reward processing. More importantly, the LFP-spike synchrony data suggested that neurons in 1 particular cluster were putative fast-spiking interneurons (FSIs) in the striatum and these neurons responded to both timing and reward processing. Experiment 2 reported electrophysiological data that were similar with previous findings, but identified a different cluster of striatal neurons - putative tonically-active neurons (TANs), revealed by their distinct spike waveforms and special firing patterns during the acquisition of the task. These firing patterns of FSIs and TANs were in contrast with potential striatal medium-spiny neurons (MSNs) that preferentially responded to temporal processing in the current study. Experiment 3 further investigated the proposal that interval timing is subserved by cortico-striatal circuits by using microstimulation. The findings revealed a stimulation frequency-dependent "stop" or "reset" response pattern in rats receiving microstimulation in either the cortex or the striatum during the performance of the timing task. Taken together, the current findings further support that interval timing is represented in cortico-striatal networks that involve multiple types of interneurons (e.g., FSIs and TANs) functionally connected with the principal projection neurons (i.e., MSNs) in the dorsal striatum. When specific components of these complex networks are electrically stimulated, the ongoing timing processes are temporarily "stopped" or "reset" depending on the properties of the stimulation.