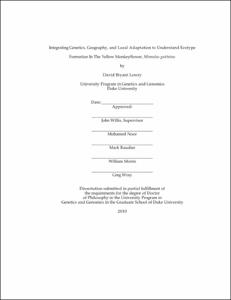 Speciation is a constantly ongoing process whereby reproductive isolating baririer build up over time until groups of organisms can no longer exchange genes with each other. Adaptation is thought to play a major role in the formation of these barriers, although the genetic mechanisms and geographic mode underlying the spread of barriers due to adaptive evolution is poorly understood. Critically, speciation may occur in stages through the formation of intermediate partially reproductively isolated groups. The idea of such widespread ecotypes has been the subject of great controversy over the last century. Even so, we have relatively little understanding about whether widespread ecotypes exist, wheather they are reproductively isolated, and how adaptive alleles are distributed among partially isolated groups. In this dissertation, I examined these issues in widespread coastal perennial and inland annual ecotypes of the yellow monkeyflower, Mimulus guttatus. First, I determined that coastal and inland populations comprise distinct ecotypic groups. I then determined that these ecotypes are adapted to their respective habitats through genetically based flowering time and salt tolerance differences. I assessed the genetic architecture of these adaptations through quantitative trait loci (QTL) analysis and determined the geographic distribution of the underlying alleles through latitudinally replicated mapping populations. I quantified the contribution of these loci to adaptation in the field through the incorporation of advance generation hybrids in reciprocal transplant experiments. In the process, I discovered a widespread chromosomal inversion to be involved in the adaptive flowering time and annual/perennial life-history shift among the ecotypes. Overall, the results of this study suggest that widespread reproductively isolated ecotypes can form through the spread adaptive standing genetic variation between habitats and that chromosomal rearrangements can integral to this process.