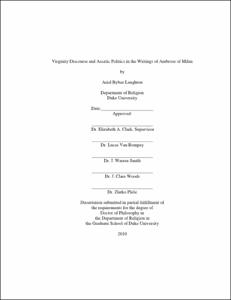 Ambrose, bishop of Milan, was one of the most outspoken advocates of Christian female virginity in the fourth century C.E. This dissertation examines his writings on virginity in the interest of illuminating the historical and social contexts of his teachings. Considering Ambrose's treatises on virginity as literary productions with social, political, and theological functions in Milanese society, I look at the various ways in which the bishop of Milan formulated ascetic discourse in response to the needs and expectations of his audience. Furthermore, I attend to the various discontinuities in Ambrose's ascetic writings in the hope of illuminating what kinds of ideological work these texts were intended to perform by the bishop within Milanese society and beyond.

In the first part of this dissertation, I consider the mechanisms of language and rhetoric promoting virginity in context of the Nicene-Homoian debate, highlighting the fluidity and flexibility of ascetic language in the late fourth century. While in his earliest teachings Ambrose expounds virginity in ways that reflect and support a Nicene understanding of the Father, Son, and Holy Spirit, his later ascetic writings display his use of anti-Homoian rhetoric in order to support his virginal ideals when they are challenged by Jovinian and others. In the second part, I examine some of the various ways in which the bishop formulated his teachings of virginity in response to the complaints and criticisms of lay members of the Christian community in Milan and elsewhere. I scrutinize the bishop's rhetorical expositions of Biblical figures such as Mary, Eve, the bride of the Song of Songs, and the Jews as a means of furthering his ascetic agenda, and consider his adaptation of a female voice to avoid incurring further criticism. Finally, I consider the role that the bishop's ascetic interests may have played in the so-called Altar of Victory controversy of 384. Largely at stake in Ambrose's dispute with the Roman senator Symmachus, I argue, were the rights and privileges of the Vestal Virgins, a well-established pagan ideology of virginity whose continued prominence and existence was largely unconscionable to the bishop. Ambrose's involvement in the controversy was partly attributable to his interest in ensuring the restriction of Vestal privileges as he perceived the cult to be in direct social and ideological competition with Christian virginity. Together, these three parts attempt to demonstrate the highly fluid and flexible nature of virginity discourse in the late fourth century and to draw attention to some of the socio-theological negotiations that took place as the cult of virginity gained increasing prominence in the Christian church.