Narrative Revenge and the Poetics of Justice in the "Odyssey": A Study on "Tisis" 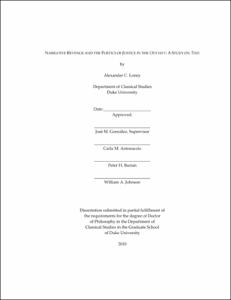 This dissertation examines the interplay of ethics and poetic craft in the <italic>Odyssey</italic> through the lens of the theme of <italic>tisis</italic>, "retribution." In this poem <italic>tisis</italic> serves two main purposes: it acts as a narrative template for the poem's composition and makes actions and agents morally intelligible to audiences. My work shows that the system of justice that <italic>tisis</italic> denotes assumes a retaliatory symmetry of precise proportionality. I also examine aspects of the ideology and social effects of this system of justice for archaic Greek culture at large. Justice thus conceived is "open-textured" and readily manipulable to the interests of the agent who controls the language of the narrative. In the end, I show that this system fails to secure communal harmony.

The project has three parts. In part one, I argue that earlier scholars have not sufficiently appreciated the narrative character of <italic>tisis</italic>. Following an inductive analysis of the poem's paradigmatic example of Orestes' <italic>tisis</italic>, I draw upon the methods of narratology to propose a new definition of <italic>tisis</italic> as a "narrative," a certain conventional arrangement of a set of actions and roles that together constitute a narrative whole. This narrative acts as a compositional tool for a singer's re-composition and performance of poetry, becoming a major organizing structure in the tradition of Homeric poetry. From this practice arises the <italic>Odyssey</italic>'s complex texture of several interwoven <italic>tisis</italic> narratives that dialectically carry out the poem's moral program. Because Homeric ethics is a narrative ethics, a practice of placing one's self and others in the stories that society tells, <italic>tisis</italic> provides an ethical framework that renders experience morally intelligible and allows actors to evaluate the moral standing of themselves and others. <italic>tisis</italic>, thus, is morally inflected: those who play the role of avenger receive commendation; those who play the victim, condemnation. And the great moral conflicts in the <italic>Odyssey</italic>--between Poseidon and Odysseus, between Odysseus and the suitors--are over the assignment and adoption of these narrative roles.

Against the other <italic>tisis</italic> narratives in the <italic>Odyssey</italic>, Odysseus' own, central narrative appears strikingly atypical. Unlike Aegisthus, the suitors have neither killed anyone nor corrupted Penelope--nonetheless, they face the same punishment. But through a creative interpretation of <italic>ius talionis</italic> the singer makes a series of brilliant rhetorical moves to recast the acts of the suitors as accomplished murder and adultery. This allows Odysseus to play the part of just avenger <italic>of himself</italic> Furthermore, it resolves in the person of Odysseus a latent tension between the narratives of <italic>nostos</italic> (which implies the happy return of a hero) and <italic>tisis</italic> (which implies the death of a hero and vengeance on his behalf).

In part two, I argue that the ideology of justice that <italic>tisis</italic> denotes--returning equivalent harm for harm--runs through the heart of archaic Greek culture, but it is always vulnerable to manipulation. Speakers--and poets especially--exploit the possibilities of ambiguity in the language of justice in order to fabricate a likeness between crimes and their punishments, thus justifying avengers. Similarly, speakers use poetic techniques to cement this ideology into more than a merely talionic retribution of "like for like" and instead construct a justice that equates a crime and its punishment. Under this strengthened regime of equivalence, crimes merge with and become their own punishment. This ideology has political consequences: I take as a banner example Alcman's <italic>Partheneion</italic>, in which the order of both the political community and the universe rests on <italic>tisis</italic>. I examine as well many other examples of a tight linkage between crime and punishment.

In part three, I return to the <italic>Odyssey</italic>, asking why the singer uses this rhetoric of synonymy of crime and punishment and why he has arranged the moral positions of the characters as he has. I conclude that this arrangement serves the narrator's seemingly monologic, overt program of justifying Odysseus and his divine patrons. But at the same time the narrator has taken the symbolic reasoning of <italic>ius talionis</italic> to a rhetorical extreme, effectively making the suitors into cannibals. Likewise, the retributive claims of the suitors' kin at the close of the poem disappear all too easily: hostilities are not so much resolved as obliterated in mass amnesia. Through such holes in the fabric of the justice of <italic>tisis</italic>, the audience perceives the workings of another program, a subversive program that calls into question the narrator's overt program and the entire, corruptible system of retributive justice.

My project thus contributes to our understanding of the <italic>Odyssey</italic>'s subversive narrative integrity, the operation of justice in archaic Greece, and the nature of narratorial authority in poetic discourse. My conclusions should interest not only philologists and literary critics, but also scholars of ethics and political theory.