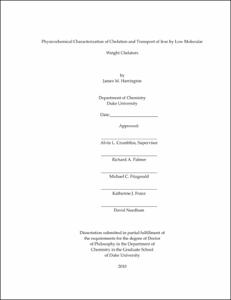 The research presented here aims to expand our understanding of the structural factors that contribute to selectivity for iron and to iron complex stability in siderophores, as well as iron transport processes in siderophore systems. This work will also investigate the factors that contribute to therapeutic applications of chelating agents, both for chelation therapy and for antimicrobial agents.

The thermodynamics of iron(III) binding of a number of molecules, both natural and synthetic, are determined using pH-dependent spectrophotometric titrations and potentiometric titrations . Three of the synthetic siderophore analogs studied here are a tris-hydroxypyridinone and two bis-hydroxypyridinone ligands. A determination of the solution thermodynamics of the iron(III) complex of a water-soluble analog of Brasilibactin A, a membrane-bound mycobactin-type bacterial siderophore is also presented and related to the role of mycobactins in iron uptake of mycobacteria. The thermodynamics of chelation of iron(III) by a synthetic Trojan Horse antimicrobial agent featuring a 3-hydroxy-4-pyridinone moiety were also determined. In these studies, the thermodynamic stability constants of the iron-chelator complexes are determined through a series of spectrophotometric and potentiometric titrations. Also, the redox chemistry of the iron-chelator complexes are investigated using cyclic voltammetry. The structural features that contribute to complex stability in a series of tripodal tris-hydroxamate siderophores using computational techniques is presented, and it is shown that the position of the arm of an exocyclic siderophore system can contribute to differences in complex stability, as can the orientation of the donor group.

Finally, an investigation into the efficacy of chelation therapy treatments to protect from metal toxicity using the nematode C. elegans as a model organism is presented. The model developed therein can also be used as a model for soil remediation of toxic metals using chelating agents.