A Paradoxical Role for PTEN in the Cellular Response to Hypoxia 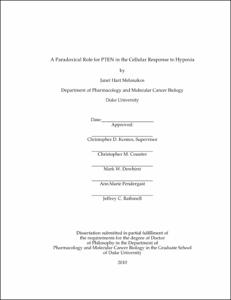 Regulation of cell growth is controlled by a variety of factors, including a number of oncogenes and tumor suppressors. PTEN is an inositol phosphatase that regulates cell growth by hydrolyzing the phospholipid products of PI3K. PTEN is mutated in a number of cancers, leading to its characterization as an important tumor suppressor. Recent data indicate that PTEN may also perform important functions that are independent of its phosphatase activity, most notably within the nucleus. Studies in this thesis addressed a novel role for PTEN in the regulation of the cellular response to hypoxia.

PTEN overexpression significantly increased hypoxic gene expression independent of its catalytic activity, while shRNA-mediated silencing of PTEN significantly inhibited hypoxia-mediated HRE-luciferase activity. Nuclear-localized PTEN was more effective in promoting HRE activity than nuclear-excluded PTEN. These results suggested a scaffolding function of PTEN in the hypoxic nucleus. To identify specific gene targets regulated by PTEN in hypoxia, a custom oligo-array consisting of 46 hypoxia-responsive genes was utilized following both gain- and loss-of- PTEN function. Based on real-time quantitative results, PTEN positively regulated genes involved in metabolism (PFKFB3, PFKFB4, ALDOA, PGK-1), oxygen supply (VEGFA, EPO), cell growth (Tgf-a, TERT, cyclin D1, BNIP3), motility (E-cadherin) and transcription (DEC2). A single missense mutation at isoleucine 224 (I224M) of PTEN, however, abrogated the ability of PTEN to regulate the hypoxia response without affecting its lipid phosphatase activity. PTEN has previously been shown to bind to the co-activator p300 and to affect p53 acetylation and stabilization. As p300 is also a co-activator for the HIF proteins, we hypothesized that PTEN's association with p300 would promote the HIF/p300 complex to positively regulate hypoxic gene transcription. Overexpression of PTEN-WT extended the half-life of p300 and histone acetyltransferase activity of p300 in hypoxia, while overexpression of PTEN-I224M or PTEN silencing decreased both. In vivo, these effects resulted in a significant increase in hypoxic area in PTEN-null tumors compared to tumors expressing endogenous levels of PTEN, suggesting an inability to mount a hypoxia response necessary for revascularization of the tissue. PTEN's effect on p300 extended to other functions of p300 outside of the hypoxia response, most notably p300's role in p53 stability and p53-mediated gene transcription. Overexpression of PTEN resulted in an increase in p53 reporter activity following DNA damage (mitomycin C treatment). PTEN silencing or overexpression of PTEN-I224M resulted in abrogation of these effects. Taken together, these findings demonstrate that PTEN is required for the hypoxia response and they suggest that PTEN acts as a scaffold for p300 and the HIF machinery in the hypoxic nucleus independent of its canonical lipid phosphatase activity. These results may have important implications for the treatment of tumors in which PTEN is lost or mutated. The potential use of PTEN-I224M as a therapeutic is also discussed