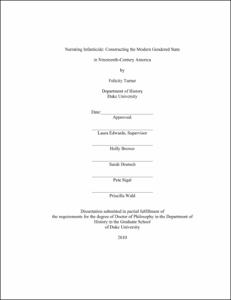 <italic>Narrating Infanticide: Constructing the Modern Gendered State in Nineteenth-Century America</italic> traces how modern ideas about gender and race became embedded in the institutions of law and government between the Revolution and the end of Reconstruction. Contemporary understandings of gender and race actually consolidated only in the aftermath of the Civil War, as communities embraced beliefs that women and African Americans constituted distinctive groups with shared, innate characteristics related solely to the fact that they were female or racially different. People then applied these ideas about gender and race to all arenas of life, including the law.

Yet understanding the roles of women and African Americans through universalizing legal conceptions of gender and/or race--conceptions that crystallized in law only in the wake of the Civil War--elides the complexity of the ways in which antebellum communities responded to the interactions of women, the enslaved, and free blacks with the legal system. My study's focus on infanticide, a crime that could only be perpetrated by females, reveals how women--and men--of all races involved themselves in the day-to-day legal processes that shaped the daily lives of Americans during the early republic and antebellum periods. Communities responded to cases of infant death informed by understandings of motherhood and child mortality specific to that particular case and individual, rather than shaping outcomes--as they began to do so after the Civil War--based on broad assumptions about the race or gender of the offender. My conclusions are drawn from almost one hundred cases of infanticide and infant death between 1789 and 1877 gleaned primarily from court records and newspapers in Connecticut, Illinois, and North Carolina. In addition, the study draws on reports of other instances from around the nation, as narrated in sources such as diaries, periodicals, newspapers, crime pamphlets, and medical journals.