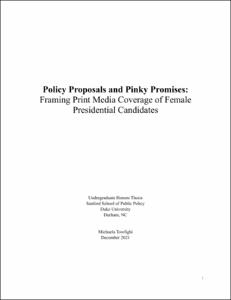 View / Download
8.8 Mb
Date
Author
Towfighi, Michaela
Advisors
Adair, Bill
Rogerson, Kenneth
Repository Usage Stats
60
views
25
downloads
Abstract
On the stage of the Wells Fargo Center in Philadelphia, Pennsylvania Hillary Clinton made history on July 26, 2016. For the first time, a major political party nominated a female candidate for President. “If there are any little girls out there who stayed up late to watch,” she told the crowd, “let me just say, I may become the first woman president, but one of you is next.” Yet, her promise fell short, and the glass ceiling she intended to crack, still remained intact. Following her historic feat, six Democratic women entered the 2020 primary in hopes to be the first female President – again, to no success. Although the press is thought to serve as the fourth pillar of democracy in the United States – informing citizens, encouraging political participation and facilitating discourse – does coverage of these historic campaigns contribute to female candidates’ sequential losses? Can coverage from news organizations serve as one explanation as to why the United States has yet to see a female leader at the helm? This paper examines how local and national news organizations frame media coverage of female Presidential campaigns in the 2016 election and 2020 Democratic primary. Coverage favored discussing a candidate’s qualifications and policy plans, as opposed to gendered tropes or comments on emotion and appearance.
Type
Honors thesis
Department
Sanford School of Public Policy/Public Policy Studies
Subject
Gender
Politics
Campaigns
Newspapers
Permalink
https://hdl.handle.net/10161/24257
Citation
Towfighi, Michaela (2021). Policy Proposals and Pinky Promises: Framing Print Media Coverage of Female Presidential Candidates. Honors thesis, Duke University. Retrieved from https://hdl.handle.net/10161/24257.
Collections
More Info
Show full item record