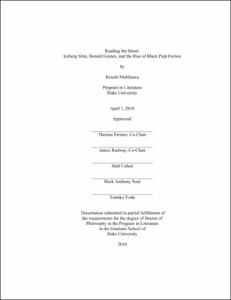 "Reading the Street" chronicles the rise of black pulp fiction in the post-civil rights era from the perspective of its urban readership. Black pulp fiction was originally published in the late 1960s and early 1970s; it consisted of paperback novels about tough male characters navigating the pitfalls of urban life. These novels appealed mainly to inner-city readers who felt left out of civil rights' and Black Power's promises of social equality. Despite the historic achievements of the civil rights movement, entrenched structural inequalities led to America's ghettos becoming sites of concentrated poverty, rampant unemployment, and violent crime. While mainstream society seemed to turn a blind eye to how these problems were destroying inner-city communities, readers turned to black pulp fiction for the imaginative resources that would help them reflect on their social reality. In black pulp fiction, readers found confirmation that America was not on the path toward extending equal opportunities to its most vulnerable citizens, or that the rise of Black Power signaled a change in their fortunes. Yet in black pulp fiction readers also found confirmation that their lives as marginalized subjects possessed a value of its own, and that their day-to-day struggles opened up new ways of "being black" amid the blight of the inner city.