Genealogy, Circumcision, and Conversion in Early Judaism and Christianity 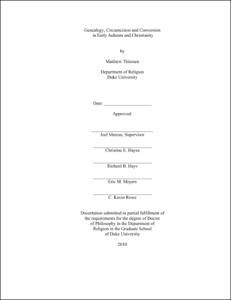 In his important work, The Beginnings of Jewishness, Shaye J. D. Cohen has argued that what it meant to be a Jew underwent considerable revision during the second century B.C.E. While previously a Jew was defined in terms of ethnicity (by which Cohen means biological descent), in the wake of Judaism's sustained encounter with Hellenism, the term Jew came to be defined as an ethno-religion--that is, one could choose to become a Jew. Nonetheless, the recent work of scholars, such as Christine E. Hayes, has demonstrated that there continued to exist in early Judaism a strain of thinking that, in theory at least, excluded the possibility that Gentiles could become Jews. This genealogical exclusion, found in works such as Jubilees, was highly indebted to the "holy seed" theology evidenced in Ezra-Nehemiah, a theology which defined Jewishness in genealogical terms.

This dissertation will attempt to contribute to a greater understanding of differing conceptions of circumcision in early Judaism, one that more accurately describes the nature of Jewish thought with regard to Jewishness, circumcision, and conversion. In terms of methodology, my dissertation will combine historical criticism with a literary approach to the texts under consideration. The dissertation will focus on texts from the Hebrew Bible as well as Jewish texts from the Second Temple period as these writings provide windows into the various forms of Judaism from which the early Christian movement arose.

Beginning with the Hebrew Bible, I will argue that there is no evidence that circumcision was considered to be a rite of conversion to Israelite religion. In fact, circumcision, particularly the infant circumcision instantiated within Israelite and early Jewish society excludes from the covenant those not properly descended from Abraham. In the Second Temple period, many Jews did begin to conceive of Jewishness in terms which enabled Gentiles to become Jews. Nonetheless, some Jews found this definition of Jewishness problematic, and defended the borders of Jewishness by reasserting a strictly genealogical conception of Jewish identity. Consequently, some Gentiles who underwent conversion to Judaism in this period faced criticism because of their suspect genealogy. Our sources record such exclusion with regard to the Herodians, Idumeans who had converted to Judaism.

Additionally, a more thorough examination of how circumcision and conversion were perceived by Jews in the Second Temple period will be instrumental in better understanding early Christianity. It is the argument of this dissertation that further attention to a definition of Jewishness that was based on genealogical descent has broader implications for understanding the variegated nature of early Christian mission to the Gentiles in the first century C.E.