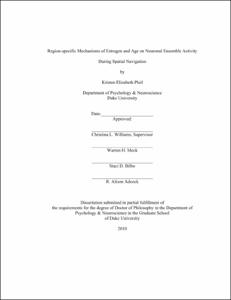 Estradiol modulates the use of spatial navigation strategies in female rats. The presence of circulating estradiol enhances learning on tasks that require the use of a hippocampus-dependent place strategy and impairs learning on tasks that require the use of a dorsal striatum-dependent response strategy. When either strategy may be used successfully, estradiol biases females to use a place strategy. While this behavioral effect has been well-described in the young adult female rat, little is known about the mechanisms in the brain that underlie it or how it changes across age. The experiments in this dissertation examined how age, previous experience, and hormonal condition affect the ability of estradiol to modulate learning during explicit training of place and response tasks, as well as navigation strategy use during ambiguous navigation tasks. Age highly influenced the ability of estradiol to influence strategy use. While female rats could use place and response strategies to navigate by postnatal day (PD) 21, estradiol did not bias them to use a response strategy until PD26, just before puberty. In adulthood, previous navigation experience and estradiol interacted to influence navigation strategy use on a series of experiences to an ambiguous navigation task. And, estradiol impaired learning during explicit response training but did not affect place learning. In middle age, estradiol further impaired response learning but still did not affect place learning. Long-term hormone deprivation, however, was detrimental to acquisition of a place task but did not affect response learning. These experiments also examined the effects of estradiol on activity, plasticity, and reliability of neuronal ensembles in several subregions of the hippocampus and striatum during spatial navigation using cellular and molecular techniques that take advantage of the kinetics of the immediate-early genes c-fos and Arc. Increased activation and plasticity during active exploration across several subregions of the hippocampus and striatum reflected similar inputs to these neural systems and similar effects of exploration. However, estradiol modulated the plasticity and reliability of neuronal ensembles in the hippocampus and striatum specifically during goal-directed spatial navigation. Estradiol increased plasticity in CA1 of all behaviorally-trained rats, but only place strategy users displayed high reliability in this plasticity across training and probe trials on a navigation task. Estradiol prevented increase in plasticity and reliability in the dorsolateral striatum displayed by low estradiol response strategy users. These experiments reveal how several factors, including age, influence estradiol's modulation of spatial navigation strategy use and suggest functional mechanisms by which this modulation occurs.