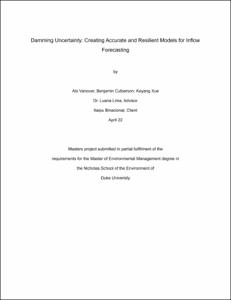 View / Download
3.0 Mb
Date
Authors
Culberson, Benjamin
Vanover, Abi
Xue, Keyang
Advisor
Lima, Luana
Repository Usage Stats
24
views
22
downloads
Abstract
On the border between Paraguay and southern Brazil lies the Itaipu Binacional Dam, the world’s second largest hydroelectric dam. Both countries contributed to the construction of the dam, which began in 1971. The dam started operation of the first two turbines in 1984, the last turbine started operation in 2007. When it was finally finished, the Itaipu dam possessed twenty turbines with a total of 14,000 MW of installed capacity. Itaipu Binacional holds two of these turbines in reserve in the event of a mechanical issue with one of the other eighteen. With these eighteen turbines, the dam can still produce up to 12,600 MW at any given moment. In a treaty signed in 1973, both Brazil and Paraguay have agreed to equally share the dam’s power output (6,300 MW maximum each). This power allocation is enough to cover 85% of Paraguay’s energy needs and 8% of Brazil’s. Paraguay’s share more than covers their energy needs; terms of the treaty allow them to sell their surplus to Brazil at production cost. As the treaty between the two countries expires in 2023, the negotiations will be intense. Brazil wants to reallocate the power generation from the dam to give it a larger share of the Itaipu energy production, while Paraguay wants to keep the status quo of equal power distribution. Paraguay is also pushing to be able to sell the surplus electricity to third parties at market price. As both countries position themselves for the renegotiation of a future power-sharing agreement, accurate forecasts of future power outputs will become ever more critical. Itaipu Binacional has consistently improved its water inflow forecasting models over the past five decades, and with each improvement, the dam has been able to produce an increasing amount of power. The improvements to these models are so consequential that although the Parana River region, where Itaipu is located, has been under drought conditions for years, the dam currently produces more power than it ever has in its current lifetime. However, properly forecasting inflows into the dam remains challenging and there is still room for improvement. The primary models Itaipu uses to predict these future inflows are deterministic, which means that they predict a single value rather than a range of values. In essence, they do not forecast with uncertainty. Furthermore, these models do not fully capture the non-linear relationship of incremental inflows and other factors that influence hydrological models, such as precipitation. To aid Itaipu Binacional with forecasting future power outputs and to give the engineers there a greater understanding of forecast uncertainty, we constructed an artificial neural network (ANN) to predict future water inflows into the Itaipu water reservoir. This ANN uses repeated iteration to gradually reach an understanding of the relationship between exogenous input variables that may influence the rate of incremental inflow into the Itaipu Dam and the incremental inflows themselves. This iterative process relies on trial and error to form these relationships; eventually the ANN model will find an optimal connection between the inputs and the incremental inflows such that the ANN can accurately predict incremental inflows just by looking at the inputs. The final ANN model can outperform a standard autoregressive integrated moving average (ARIMA) time series forecast in many situations and can help the engineers at Itaipu Binacional more comprehensively understand inflow uncertainty to Itaipu. Even in the situations in which the ARIMA model more accurately forecasts incremental inflows, the ANN model still consistently provides more useful information to the user. The ARIMA model forecasts quite conservatively and fails to model the variability of the incremental inflows. Past data shows incremental inflows into Itaipu to be constantly increasing or decreasing, and never stagnant for long. In general, the final ANN model more accurately predicts this variability while the ARIMA generally forecasts a linear trend, a linear trend that does not align with past observed inflows. Thus, the ANN model, when combined with the reasonably accurate models currently used by Itaipu Binacional, provides much more insight than the ARIMA model. For the operators at the dam to optimize power production, they will need as much information as possible about future extreme inflows. For the purposes of providing this kind of information, the ANN model is significantly more useful than the ARIMA model. While the ANN model is unlikely to replace Itaipu Binacional’s current deterministic hydrological models, its ability to assist in the forecast of extreme incremental inflows into the dam means it can provide value to the engineers at Itaipu Binacional.
Type
Master's project
Department
Nicholas School of the Environment
Subject
Hydrological inflow forecasting
Climate change
Time series analysis
Artificial neural network
Permalink
https://hdl.handle.net/10161/24889
Citation
Culberson, Benjamin; Vanover, Abi; & Xue, Keyang (2022). Damming Uncertainty: Creating Accurate and Resilient Models for Inflow Forecasting. Master's project, Duke University. Retrieved from https://hdl.handle.net/10161/24889.
Collections
More Info
Show full item record