"Our Seeds Sprouted:" The Human Betterment League of North Carolina, 1947-1988 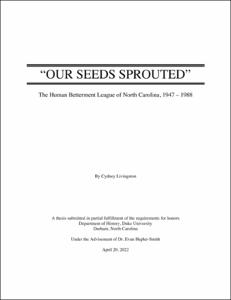 View / Download
8.1 Mb
Date
Author
Livingston, Cydney
Advisor
Hepler-Smith, Evan
Repository Usage Stats
32
views
19
downloads
Abstract
Eugenics is largely remembered for coming into disrepute in the post-War period following the Nazi regime and the Holocaust. However, 21st-century scholarship has begun to assess the transformations and proliferations of “eugenics” in the latter 20th century. This has prompted a reconceptualization of the complex relationships of reproductive choice, genetic manipulability, and the progression of modern science and medicine – as well as the historic foundations of these ideas and institutions. This thesis centers on the Human Betterment League of North Carolina (the HBLNC or the League) from 1947 to 1988 across their three periods of work promoting distinct causes: first, sterilization; second, population control; and third, genetics. Drawing on a range of internal documents and public-facing educational materials from the HBLNC archives, this thesis reveals how each period of the League’s work represents a unique historical project of eugenics bound by the overarching goal of “human betterment” via reproductive control. The narrative of the League connects local and global histories, exemplifying how reproduction has been tied to both small-scale and world-spanning projects of development, as well as identifies the critical role that women had within eugenics projects as members of HBLNC leadership. Rather than be completely abandoned at the turn of the 20th century, eugenics aspiration for human “betterment” were reintegrated into the landscapes of increasingly robust and sophisticated tools and ideas about science, medicine, and reproduction.
Type
Honors thesis
Department
History
Subject
eugenics
Human Betterment League of North Carolina
population control
genetics counseling
history of biology
reproductive control
Permalink
https://hdl.handle.net/10161/25035
Citation
Livingston, Cydney (2022). "Our Seeds Sprouted:" The Human Betterment League of North Carolina, 1947-1988. Honors thesis, Duke University. Retrieved from https://hdl.handle.net/10161/25035.
Collections
More Info
Show full item record