Stevens After Deleuze: The Effects of a New Ontology on the Problems of Poetics 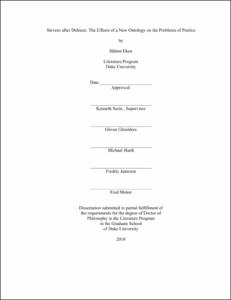 Gilles Deleuze's definition of the other as the expression of a possible world has introduced a novel ontological organization into philosophy. It makes possible the conception of a singular being which may be expressed by a potentially infinite number of possible worlds. This, in turn, has lead Deleuze to propound the idea of "a life," immanent and impersonal but singularly determinate, as different from the universe of subjects, objects, and the transcendence that appears as their concomitant. This study resituates Wallace Stevens in the ontological universe of "a life" as opposed to the common practice of associating him with the questions of subject, object, and transcendence. It observes that Stevens's poetry primarily invests the field of the other, which functions as the structure of the perceptible. The result is a poetry predominated by a yearning for the immanence of "a life," an outside, that escapes the limits of the subject and is "disappointed" with the function of transcendence, rather than being explained by them. The study argues that Stevens's poetry can be read as a dramatization, itself regulated by an affective charge, of the passion for an outside, which goes beyond the framework of subjectivity and "feels" the inhuman stirring beneath the human.