Features of imagination that contribute to value-based decision making 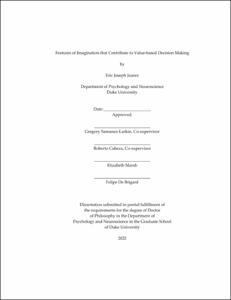 Humans make a variety of choices every day. Some of these choices are pretty mundane like whether to eat pancakes or oatmeal for breakfast. Others cost a little more, have a little bit of a longer impact, like which vacuum cleaner to buy on Amazon. And finally, there are choices that we don’t make very often—maybe even just once, that have enormous consequences in our lives like whether to choose Duke for graduate school. Deciding to choose one option over a set of alternatives involves imagining the future value that could be obtained by making those choices. Research on value-based decision making has recently begun to assess the impact of memory-related processes in making prospective decisions. Given that remembering the past and imagining the future rely on the same cognitive and neural mechanisms, researchers have investigated how imagining the future and remembering the past shift choice behavior. However, much of this research has focused on relatively abstract choices made in a laboratory setting rather than potentially more impactful long-term decisions that we make in everyday life. Overall, it is unclear to what extent memory-related systems impact a range of choices that humans make in everyday life from minor financial transactions to consequential life choices. Across three studies, I examine the role of the constructive memory process of imagination in decisions between shorter-term monetary rewards available at different temporal delays as well as longer-term consequential life choices like career decisions. Chapter 1 provides a general overview of past research on the role of constructive memory processes in making decisions. In chapter 2 (Study 1), after rehearsal of hypothetical imagined future events, younger adults and older adults made choices between larger-later and smaller-sooner monetary rewards. Some of the trials included a cue that invoked the imagined future event whereas other trials did not include a cue. Younger adults were more likely to choose larger, delayed monetary rewards on trials where the imagined future event was cued compared to trials without a cue. However, older adults did not show an effect of cued imagination. Across age groups, functional neuroimaging data revealed that trials with an imagination cue elicited greater engagement of regions that are part of the default mode network including the posterior cingulate cortex, angular gyrus, and medial prefrontal cortex. This network is commonly engaged during thinking about past memories as well as imagining the future in many studies that did not focus on decision making. Interestingly, this difference in neural activity did not vary across age groups even though the behavioral effect of the cue was limited to younger adults. In Chapter 3, I explore the effects of imagining previous successes and failures on choices between larger-later and smaller-sooner monetary rewards (Studies 2a & 2b). I find no conclusive evidence of differences in decisions based on whether people imagined successes or failures, even when comparing to a non-imagined, emotionally neutral control condition. Finally, in chapter 4, I extend this work into more complex career decision making. In a pilot study (Study 3), greater enjoyment of an imagined future career was associated with increased preference for that career option. Given the small and variable effects of imagining the future on decision making in Studies 1-3, two additional studies (Study 4a & 4b) evaluated the effects on decision making of an individual’s ability to vividly visualize, a different cognitive measure potentially relevant to thinking about and imagining the future. Using multivariate analyses, we found that vividness of visual imagery along with a set of individual difference measures related to future time perspective, self-efficacy, and well-being were associated with a set of variables crucial to career decision making. Together, these studies qualify our understanding of the role of imagination and visual imagery in decision making from choices between small rewards in the laboratory and consequential life choices. Overall various forms of imagination had relatively small and inconsistent effects on both laboratory-based and real-world decisions, whereas visual imagery had a moderate and consistent shared effect on real world decisions. The findings have broad implications for guiding prospective decisions in humans across the life span. For example, educational institutions currently have little to no focus on imagination and imagery in guiding developing students toward their future lives. There are critical opportunities in higher education to integrate imagination and imagery into living and learning communities to support students in their transitions to independent and rewarding careers.