The Couch Tract of the Durham Division of the Duke Forest: A History of Agricultural Land-Use Patterns 1750-1950 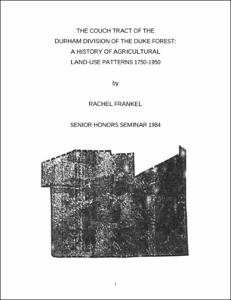 View / Download
637.6 Kb
Date
Author
Frankel, Rachel
Repository Usage Stats
831
views
1,084
downloads
Abstract
For most of us a walk through the Duke Forest is more than fresh air and tall trees. It is an escape from manmade surroundings to Mother Nature's paradise. Walking along a barely distinguishable trail, taking refreshment in what appears to be the virginal out-of-doors, one imagines undisturbed generations of wildlife touched only by the changing seasons. If, by mistake or romantic inclination, the nature-lover leaves the trail and discovers the vacated furrows or abandoned farm houses, the surrounding forest, once perceived as pure and unchanged, takes on a new identity. Here are retired farmlands where fields and pastures have, over the decades and generations, grown into woodlots and meadows. Who farmed this land and for how long? What crops and livestock did the farmer cultivate and raise? What sorts of agricultural techniques and implements did he employ? Whom, and how many people did the land support? What were the consequences for the land when generations of farmers stripped the forest and tilled the soil? These are but a few of the questions a detailed study of the land-use practices of the Couch Tract of the Durham Division of the Duke Forest answers. Finally, why was this land, after spending two hundred years in the same family, permanently retired and eventually sold to Duke University in 1947? Such a study relies extensively on primary sources, such as estate papers, wills, personal letters, family papers, land deeds, and population, agricultural and slave census schedules. In addition, this kind of land-use analysis utilizes soil surveys, aerial photographs and forest cover maps. Tax lists, legal papers and oral histories are other important resource tools for land-use research and analysis. This thesis is a case study of the history of a family of small farmers and their attempts, over five generations, to get a living from their land. This thesis examines the 4 possibilities and the limits of certain agricultural practices and the intelligent yet doomed approach to landuse the Couchs chose. This study does not just seek to find out about a family and its farm. Rather, it attempts to discover the different stages of change and the reasons for those changes. For instance; when did the farm begin producing for the market and why, why were some crops cultivated early in the history of the farm and others later? Most historical studies of agricultural practices in the South focus on the southern plantation. Historians such as William C. Bagley, Philip A. Courtney, Susan Dabney Smedes, and Julius Rubin have studied the failure of the southern plantation and have provided us with rich and detailed information on the southern planter. Although plantations produced the bulk of the staple crops of the South, small farmers made up the majority of rural Southerners. The study of the historical significance of the small southern farm and its agricultural practices--how it adapted to change and its eventual collapse--has just begun. This investigation of the Couch family lands represents a contribution to that history.
Description
Senior Honors Seminar
Type
Honors thesis
Department
History
Permalink
https://hdl.handle.net/10161/2527
Citation
Frankel, Rachel (1984). The Couch Tract of the Durham Division of the Duke Forest: A History of Agricultural Land-Use Patterns 1750-1950. Honors thesis, Duke University. Retrieved from https://hdl.handle.net/10161/2527.
Collections
More Info
Show full item record