The absence of the corporation in Islamic law: Origins and persistence 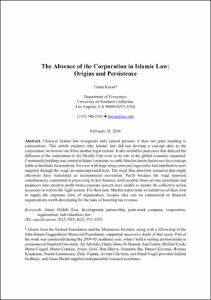 View / Download
318.4 Kb
Date
Author
Kuran, T
Repository Usage Stats
531
views
5,517
downloads
Abstract
Classical Islamic law recognizes only natural persons; it does not grant standing to corporations. This article explores why Islamic law did not develop a concept akin to the corporation, or borrow one from another legal system. It also identifies processes that delayed the diffusion of the corporation to the Middle East even as its role in the global economy expanded. Community building was central to Islam's mission, so early Muslim jurists had no use for a concept liable to facilitate factionalism. Services with large setup costs and expected to last indefinitely were supplied through the waqf, an unincorporated trust. The waqf thus absorbed resources that might otherwise have stimulated an incorporation movement. Partly because the waqf spawned constituencies committed to preserving its key features, until modern times private merchants and producers who stood to profit from corporate powers were unable to muster the collective action necessary to reform the legal system. For their part, Muslim rulers took no initiatives of their own to supply the corporate form of organization, because they saw no commercial or financial organizations worth developing for the sake of boosting tax revenue.
Type
Journal article
Permalink
https://hdl.handle.net/10161/2546
Collections
More Info
Show full item record