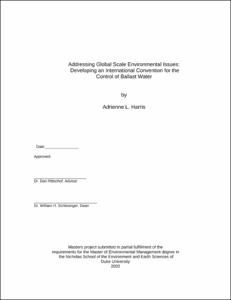 View / Download
93.4 Kb
Date
Author
Harris, Adrienne L.
Advisor
Rittschof, Daniel
Repository Usage Stats
658
views
527
downloads
Abstract
Environmental concerns regarding international shipping transcend national boundaries and therefore need to be addressed through an international forum. One such forum, the International Maritime Organization (IMO) is facilitating the creation of a treaty for the management of ballast water to prevent the transfer of invasive species throughout the globe. Having a universal set of regulations for ballast water is important for the shipping industry as well as the global environment. At the international level, there are many hurdles to reaching agreement on an appropriate action, including the complexity of the issue, frequent scientific uncertainty, and a wide range of actors and interests. These obstacles have lengthened the draft negotiation period for the ballast water treaty beyond the original desired timeline and beyond that of the Convention on Harmful Anti-fouling Systems on Ships, which began being drafted at the same time, yet was adopted in 2001. In addition, economic, procedural, and political factors absent from the ballast water negotiation process accelerated the negotiating process for the anti-fouling treaty. The IMO plans to hold a diplomatic conference to adopt the ballast water treaty in 2004; however major aspects of the treaty are still under debate. Consequently, the likelihood that the treaty will prevent transfer of species is still undeterminable in my opinion. Progress in upcoming IMO meetings will determine if the draft will be ready for a 2004 diplomatic conference. If a treaty is to be generated, it is imperative that the organization hold the conference in 2004 to minimize unilateral actions that would create a complex web of regulations. Progress for the group has been slow, but the work the group is doing creates precedent for future pollution treaties.
Type
Master's project
Department
Nicholas School of the Environment and Earth Sciences
Subject
International Maritime Organization (IMO)
Ballast Water
Convention on Harmful Anti-fouling Systems on Ships
Permalink
https://hdl.handle.net/10161/261
Citation
Harris, Adrienne L. (2003). Addressing Global Scale Environmental Issues: Developing an International Convention for the Control of Ballast Water. Master's project, Duke University. Retrieved from https://hdl.handle.net/10161/261.
Collections
More Info
Show full item record