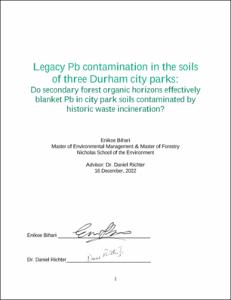 View / Download
3.0 Mb
Date
Author
Bihari, Enikoe
Advisor
Richter, Daniel
Repository Usage Stats
56
views
55
downloads
Abstract
Lead (Pb) has historically been used in many products such as gasoline, paint, batteries, ceramics, pipes and plumbing, solders, and cosmetics, and Pb contamination from these materials and their waste streams is widespread around the world. Pb is a highly insoluble and persistent contaminant that accumulates in the environment, especially in urban soils; to this day, soil Pb concentrations remain high in many cities, posing a significant long-term public health and environmental risk. Some remediation options are available for Pb, with the most effective being removal and replacement of the contaminated soil. However, plants that can tolerate soil Pb may be effective at phytostabilization. In phytostabilization, soil Pb is immobilized both physically and chemically by the roots, while also being sequestered by new layers of organic matter and soil that accumulate on the surface. Throughout the early 1900s, the city of Durham, NC operated neighborhood municipal incinerators which combusted most of the city’s waste, including waste collected from homes, businesses, and public street cleaning. Around 1950, the four of the incinerator sites were closed and converted into public parks, with playgrounds, grass fields, picnic benches, sports facilities, and walking paths. These are now Walltown, East End, East Durham, and Lyon Parks. The parks currently contain streams and large areas of secondary forest cover, which have been largely unmanaged throughout the last century. From local newspaper articles, we have direct evidence for the disposal of incinerator refuse at these sites and other Durham parks. While historic news accounts describe the incinerator sites being covered with topsoil, until this study there has been no monitoring of the status of contaminant metals in the soils throughout the parks. We hypothesized that the surface soils of these parks had elevated Pb concentrations as the result of the parks’ history of incineration. Our primary objectives were to: 1. Measure total mineral surface soil Pb concentrations across three of Durham’s urban parks which were historically used for waste incineration (Walltown, East End, and East Durham Parks). 2. Assess whether secondary hardwood forests have accumulated organic horizons that were effective barriers to Pb-contaminated mineral soil below. We sampled mineral surface soil and organic horizon according to a stratified random sampling design, and the samples were measured for total Pb with an Olympus Vanta pXRF instrument. Data were analyzed using R and ArcGIS Pro, resulting in statistical models and spatial interpolations. Our main results were: 1. Mineral soil Pb concentrations across Walltown, East End, and East Durham Parks are elevated above both geologic background levels and several EPA hazard thresholds, especially in some highly-trafficked areas. 2. Hardwood forest organic horizons provide a blanket for highly Pb-contaminated mineral soil, but a significant amounts of surface soil Pb is mixed up into these O horizons. Thus, exposure risk is not eliminated and can remain quite high. Our results show that all three parks have total Pb in surface soils (0-2.5 cm) well above the geologic background (0-30 ppm), with many soils exceeding the US EPA’s hazard thresholds for gardening (100 ppm), residential play areas (400 ppm), and residential non-play areas (1200 ppm). For all three parks combined, mineral soil Pb ranged from 8 to 2342 ppm, with a mean of 201 ppm and a median of 93 ppm. A notable hotspot with extremely high Pb was mapped throughout the southeastern portion of East Durham Park north of East Main St., spanning a grassy field and part a secondary forest (Figure 12). Mineral soil Pb in this hotspot ranged from 694 to 2342 ppm. This is of particular concern because this field is adjacent to an apartment building, and residents appear to use this area to play, garden, and park their cars. Additionally, our study demonstrates that while hardwood O horizons provide a physical barrier to exposure for highly contaminated mineral soil, a significant amount of mineral soil Pb is mixed up into the O horizons. This relationship differed significantly between the upper O1/O2 and the lower O3 horizons. Pb concentration in the lower O3 horizon increased by 0.6 ppm for every 1 ppm increase in Pb increase in the mineral soil, with an adjusted R2 of 0.86. This means that the lower O3 horizon has about 60% of the Pb concentration of the mineral soil below. In contrast, Pb concentration in the upper O1/O2 horizon increased by 0.1 ppm for every 1 ppm increase in Pb increase in the mineral soil, with an adjusted R2 of 0.49. This means that the upper O1/O2 horizons have about 10% of the Pb concentration of the mineral soil below, Our results suggest limitations to phytostabilization as tool to reduce Pb exposure, particularly in hardwood forests where there is relatively rapid decomposition and bioturbation in the O horizons compared to many coniferous forests. Overall, the spatial distribution of soil Pb concentrations demonstrates the complicated land use history of these landscapes, pointing towards multiple sources of Pb inputs and outputs throughout the 20th century. Based on articles in historic newspapers from five cities across the USA, many municipalities may have public parks converted from historic waste incinerator sites; these sites may be contaminated with Pb and other metals that would have accumulated in ash and cinders, posing an exposure risk to residents who visit the parks.
Type
Master's project
Department
Nicholas School of the Environment
Subject
lead
Pb
urban forest
Durham
park
soil
O horizon
incinerator
Permalink
https://hdl.handle.net/10161/26369
Citation
Bihari, Enikoe (2022). Legacy Pb contamination in the soils of three Durham city parks: Do secondary forest organic horizons effectively blanket Pb in city park soils contaminated by historic waste incineration?. Master's project, Duke University. Retrieved from https://hdl.handle.net/10161/26369.
Collections
More Info
Show full item record