EVALUATION OF A NEW FLEXION WRIST INTEGRATED WITH ELECTRIC HAND 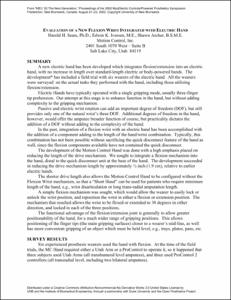 View / Download
346.2 Kb
Date
Authors
Sears, Harold H.
Iversen, Edwin K.
Archer, Shawn
Repository Usage Stats
357
views
550
downloads
Abstract
A new electric hand has been developed which integrates flexion/extension into an electric hand, with no increase in length over standard-length electric or body-powered hands. The development* has included a field trial with six wearers of the electric hand. All the wearers were surveyed on the actual tasks they performed with the hand, including those utilizing flexion/extension. Electric Hands have typically operated with a single gripping mode, usually three-finger tip prehension. Our attempt at this stage is to enhance function in the hand, but without adding complexity to the gripping mechanism. Passive and electric wrist rotation can add an important degree of freedom (DOF), but still provides only one of the natural wrist’s three DOF. Additional degrees of freedom in the hand, however, would offer the amputee broader function of course, but practicality dictates the addition of a DOF without adding to the complexity of the hand.
Type
Other article
Subject
flexion
wrist
electric hand
prosthetics
Permalink
https://hdl.handle.net/10161/2674
Citation
MEC '02 : the next generation : University of New Brunswick's Myoelectric Controls/Powered Prosthetics Symposium, Fredericton, N.B., Canada, August 21-23, 2002 : conference proceedings.
Collections
More Info
Show full item record