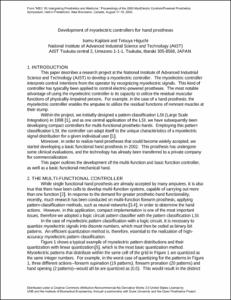 View / Download
507.5 Kb
Date
Authors
Kajitani, Isamu
Higuchi, Tetsuya
Repository Usage Stats
368
views
618
downloads
Abstract
This paper describes a research project at the National Institute of Advanced Industrial Science and Technology (AIST) to develop a myoelectric controller. The myoelectric controller interprets control intentions from the operator by recognizing myoelectric signals. This kind of controller has typically been applied to control electric-powered prostheses. The most notable advantage of using the myoelectric controller is its capacity to utilize the residual muscular functions of physically-impaired persons. For example, in the case of a hand prosthesis, the myoelectric controller enables the amputee to utilize the residual functions of remnant muscles at their stump. Within the project, we initially designed a pattern classification LSI (Large Scale Integration) in 1998 [1], and as one central application of the LSI, we have subsequently been developing compact controllers for multi-functional prosthetic-hands. Employing this pattern classification LSI, the controller can adapt itself to the unique characteristics of a myoelectric signal distribution for a given individual user [1]. Moreover, in order to realize hand-prostheses that could become widely accepted, we started developing a basic functional hand prosthesis in 2002. This prosthesis has undergone some clinical evaluations, and the technology has already been transferred to a private company for commercialization. This paper outlines the development of the multi-function and basic function controller, as well as a basic functional mechanical hand.
Type
Other article
Subject
myoelectric controllers
Prosthetic Hand
Permalink
https://hdl.handle.net/10161/2715
Citation
Proceedings of the MEC’05 conference, UNB; 2005.
Collections
More Info
Show full item record