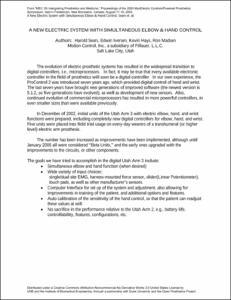 View / Download
386.5 Kb
Date
Authors
Sears, Harold
Iversen, Edwin
Hays, Kevin
Madsen, Ron
Repository Usage Stats
414
views
891
downloads
Abstract
The evolution of electric prosthetic systems has resulted in the widespread transition to digital controllers, i.e., microprocessors. In fact, it may be true that every available electronic controller in the field of prosthetics will soon be a digital controller. In our own experience, the ProControl 2 was introduced seven years ago, which provided digital control of hand and wrist. The last seven years have brought new generations of improved software (the newest version is 5.1.2, so five generations have evolved), as well as development of new sensors. Also, continued evolution of commercial microprocessors has resulted in more powerful controllers, in even smaller sizes than were available previously. In December of 2002, initial units of the Utah Arm 3 with electric elbow, hand, and wrist functions were prepared, including completely new digital controllers for elbow, hand, and wrist. Five units were placed into field trial usage on every-day wearers of a transhumeral (or higher level) electric arm prosthesis. The number has been increased as improvements have been implemented, although until January 2005 all were considered “Beta Units,” and the early ones upgraded with the improvements to the circuits, or other components.
Type
Other article
Subject
Elbow control
hand control
Permalink
https://hdl.handle.net/10161/2742
Citation
Proceedings of the MEC’05 conference, UNB; 2005.
Collections
More Info
Show full item record