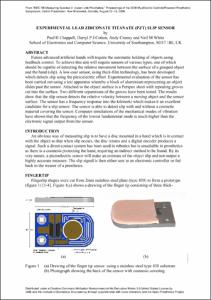 View / Download
1.1 Mb
Date
Authors
Chappell, Paul H.
Cotton, Darryl P.J.
Cranny, Andy
White, Neil M.
Repository Usage Stats
419
views
354
downloads
Abstract
Future advanced artificial hands will require the automatic holding of objects using feedback control. To achieve this aim will require sensors of various types, one of which should be capable of detecting the relative movement between the surface of a grasped object and the hand (slip). A low-cost sensor, using thick-film technology, has been developed which detects slip using the piezoelectric effect. Experimental evaluation of the sensor has been carried out using a test apparatus whereby a block of aluminium representing an object slides past the sensor. Attached to the object surface is a Perspex sheet with repeating groves cut into the surface. Two different separations of the groves have been tested. The results show that the slip sensor detects the relative velocity between a moving object and the sensor surface. The sensor has a frequency response into the kilohertz which makes it an excellent candidate for a slip sensor. The sensor is able to detect slip with and without a cosmetic material covering the sensor. Computer simulations of the mechanical modes of vibration have shown that the frequency of the lowest fundamental mode is much higher than the electronic signal output from the sensor.
Type
Other article
Subject
experimental
slip sensor
Permalink
https://hdl.handle.net/10161/2763
Citation
Proceedings of the MEC’08 conference, UNB; 2008.
Collections
More Info
Show full item record