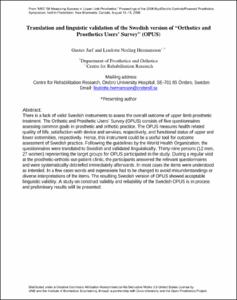 View / Download
2.2 Mb
Date
Authors
Jarl, Gustav
Hermansson, Liselotte Norling
Repository Usage Stats
866
views
618
downloads
Abstract
There is a lack of valid Swedish instruments to assess the overall outcome of upper limb prosthetic treatment. The Orthotic and Prosthetic Users’ Survey (OPUS) consists of five questionnaires assessing common goals in prosthetic and orthotic practice. The OPUS measures health related quality of life, satisfaction with device and services, respectively, and functional status of upper and lower extremities, respectively. Hence, this instrument could be a useful tool for outcome assessment of Swedish practice. Following the guidelines by the World Health Organization, the questionnaires were translated to Swedish and validated linguistically. Thirty-nine persons (12 men, 27 women) representing the target groups for OPUS participated in the study. During a regular visit at the prosthetic-orthotic out-patient clinic, the participants answered the relevant questionnaires and were systematically debriefed immediately afterwards. In most cases the items were understood as intended. In a few cases words and expressions had to be changed to avoid misunderstandings or diverse interpretations of the items. The resulting Swedish version of OPUS showed acceptable linguistic validity. A study on construct validity and reliability of the Swedish OPUS is in process and preliminary results will be presented.
Type
Other article
Subject
Prosthetics
Orthotics
Permalink
https://hdl.handle.net/10161/2786
Citation
Proceedings of the MEC’08 conference, UNB; 2008.
Collections
More Info
Show full item record