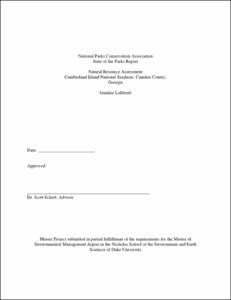 View / Download
1.2 Mb
Date
Author
Laliberté, Jennifer
Advisor
Eckert, Scott
Repository Usage Stats
428
views
1,132
downloads
Abstract
The National Parks Conservation Association through their Center for the State of the Parks (NPCA-SOTP) is currently performing natural resource assessments of the nation’s national parks. As a part of this program, I was contracted to do a natural resource assessment of Cumberland Island National Seashore (CUIS) in Camden County, Georgia. CUIS is a barrier island located off the coast of Georgia just north of the Florida border. It has been subject to anthropogenic use for at least 4000 years, with major occupations beginning with the arrival of the Spainards in the 1500s. After changing hands several times, the island became the property of the National Park Service in 1972 (16 U.S.C. 459i et seq) under the authority of the National Parks Organic Act of 1916. CUIS also includes a Congressionally-designated wilderness area that was established in 1982 (16 U.S.C. 1131 et seq.) under the authority of the Wilderness Act of 1964. There are 18 retained-rights estates within the boundaries of the seashore, as well as 2 tracts of land that are still held as private property. The management regime for the park includes a general management plan that was published in 1984. There is currently a new management plan being drafted for the park, which includes management policies for cultural resources, natural resources, and the wilderness area. A fire management plan was published in 2004, and dictates the allowance of natural fires except where humans or buildings are threatened. CUIS maintains good habitat structure with the exception of a few areas that were modified over the years of human use, including modifications made for agriculture and the presence of several buildings. Some of the modified areas are being allowed to regain their natural state, while some areas are preserved by the NPS as cultural landscapes. The structure and function of the island’s ecosystems have changed in response to anthropogenic pressure and the introduction of feral species, mainly hogs and horses, continues to have a profound effect upon the island’s ability to recuperate. The periods of human occupation also resulted in the extirpation of all of the island’s top predators, including black bears and bobcats. This likely has resulted in an alteration of fundamental predator-prey processes. The primary recommendations for natural resource management within the park include an immediate reduction of the feral horse population, ideally confining the remaining individuals to the southern end of the park, continuing the hog eradication program, and regulating human visitation to the island, particularly the arrival of visitors to the island via personal watercraft. Impacts to the island should be considered and mitigated as the surrounding areas of Camden County are developed. Finally, increased monitoring and funding to Cumberland Island’s natural resource program are critical to understanding and mitigating current and future impacts.
Type
Master's project
Department
Nicholas School of the Environment and Earth Sciences
Subject
National Parks Conservation Association, Center for the State of the Parks (NPCA-SOTP)
Cumberland Island National Seashore (CUIS)
Camden County, Georgia
Natural Resource Management
Permalink
https://hdl.handle.net/10161/279
Citation
Laliberté, Jennifer (2007). National Parks Conservation Association State of the Parks Report: Natural Resource Assessment Cumberland Island National Seashore, Camden County, Georgia. Master's project, Duke University. Retrieved from https://hdl.handle.net/10161/279.
Collections
More Info
Show full item record