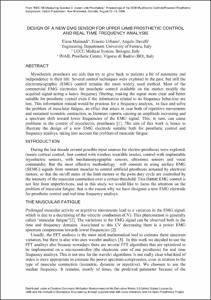 View / Download
319.0 Kb
Date
Authors
Mainardi, Elena
Urbano, Ernesto
Davalli, Angelo
Repository Usage Stats
669
views
817
downloads
Abstract
Myoelectric prosthesis are aids that try to give back to patients a bit of autonomy and indipendence in their life. Several control techniques were explored in the past, but still the electromyographic (EMG) control remains the most widely used method. Most of the commercial EMG electrodes for prosthetic control available on the market modify the acquired signal acting a heavy frequency filtering, making the signal more clear and better suitable for prosthetic control even if the information related to its frequency behaviour are lost. This information instead would be precious for a frequency analysis, to face and solve the problem of musclular fatigue, an effect that arises in case both of repetitive movements and sustained isometric contraction, as literature reports, causing an amplitude increasing and a spectrum shift toward lower frequencies of the EMG signal. This, in turn, can cause problems in the control of myoelectric prostheses [1]. The aim of this work is hence to illustrate the design of a new EMG electrode suitable both for prosthetic control and frequency analisys, taking into account the problem of muscular fatigue.
Type
Other article
Subject
Upper Limb Prosthesis
Permalink
https://hdl.handle.net/10161/2796
Citation
Proceedings of the MEC’08 conference, UNB; 2008.
Collections
More Info
Show full item record