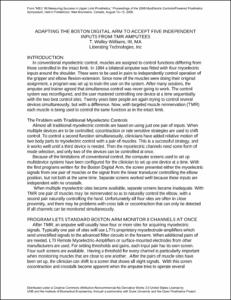 View / Download
473.7 Kb
Date
Author
Williams, T. Walley, III
Repository Usage Stats
550
views
173
downloads
Abstract
In conventional myoelectric control, muscles are assigned to control functions differing from those controlled in the intact limb. In 1984 a bilateral amputee was fitted with four myoelectric inputs around the shoulder. These were to be used in pairs to independently control operation of the gripper and elbow flexion-extension. Since none of the muscles were doing their original assignment, a program was set up to train the user on the system. After many sessions, the amputee and trainer agreed that simultaneous control was never going to work. The control system was reconfigured, and the user mastered controlling one device at a time sequentially with the two best control sites. Twenty years later people are again trying to control several devices simultaneously, but with a difference. Now, with targeted muscle reinnervation (TMR) each muscle is being used to control the same function as in the intact limb.
Type
Other article
Subject
Amputees
digital arm
Permalink
https://hdl.handle.net/10161/2823
Citation
Proceedings of the MEC’08 conference, UNB; 2008.
Collections
More Info
Show full item record