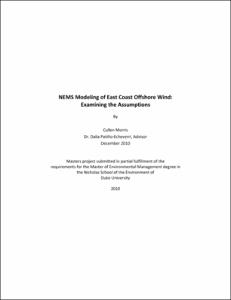 View / Download
1.3 Mb
Date
Author
Morris, Cullen
Advisor
Patino-Echeverri, Dalia
Repository Usage Stats
455
views
1,249
downloads
Abstract
The Energy Information Administration’s (EIA) National Energy Modeling System (NEMS) is widely considered a credible source for domestic energy projections, and is frequently used to inform state and federal policy decisions. The model is used to publish the Annual Energy Outlook (AEO). The 2010 AEO publication suggest that offshore wind development along the eastern seaboard is predicted to grow very little over the next 25 years, yet there are currently over 2.5 GW of proposed offshore projects in this area, with interest growing steadily. This project seeks to determine whether NEMS modeling of offshore wind is based on accurate assumptions and on the current state of the industry. Key factors that shape NEMS results are examined. These factors include the shallow water offshore wind resource off the eastern seaboard, the overnight capital costs assumed by the model, and the way in which transmission and reliability costs associated with offshore wind are treated. The assumptions used by the EIA in their modeling were examined for each of these factors. Modeling scenarios were built to test the sensitivity of the results to changes in these assumptions. This method helped to identify which parameters weigh most heavily in how the model determines whether offshore wind will play a role in the near-term future of renewable energy production. Findings indicate that wind resource estimates are out-dated, but that the wind resource is not a constraint on the offshore development. Capital cost assumptions are in line with accepted industry values, and are the largest factor in how much offshore wind capacity is added over the next twenty-five years. This research suggests that capital costs must decrease by as much as 35% before offshore wind can out-compete other forms of renewable generation. Transmission and reliability cost effects are difficult to assess without more access to model data and the calculations it employs. Recommendations for improving the model include more transparency in assumptions and better documentation of model inputs and outputs.
Type
Master's project
Department
Nicholas School of the Environment and Earth Sciences
Subject
NEMS, Offshore wind, Energy modeling
Energy Information Administration
Annual Energy Outlook 2010
Permalink
https://hdl.handle.net/10161/2872
Citation
Morris, Cullen (2010). NEMS Modeling of East Coast Offshore Wind: Examining the Assumptions. Master's project, Duke University. Retrieved from https://hdl.handle.net/10161/2872.
Collections
More Info
Show full item record