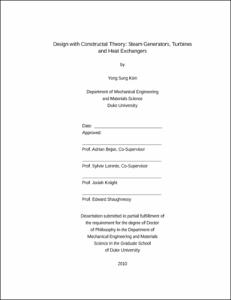 This dissertation shows that the architecture of steam generators, steam turbines and heat exchangers for power plants can be predicted on the basis of the constructal law. According to constructal theory, the flow architecture emerges such that it provides progressively greater access to its currents. Each chapter shows how constructal theory guides the generation of designs in pursuit of higher performance. Chapter two shows the tube diameters, the number of riser tubes, the water circulation rate and the rate of steam production are determined by maximizing the heat transfer rate from hot gases to riser tubes and minimizing the global flow resistance under the fixed volume constraint. Chapter three shows how the optimal spacing between adjacent tubes, the number of tubes for the downcomer and the riser and the location of the flow reversal for the continuous steam generator are determined by the intersection of asymptotes method, and by minimizing the flow resistance under the fixed volume constraints. Chapter four shows that the mass inventory for steam turbines can be distributed between high pressure and low pressure turbines such that the global performance of the power plant is maximal under the total mass constraint. Chapter five presents the more general configuration of a two-stream heat exchanger with forced convection of the hot side and natural circulation on the cold side. Chapter six demonstrates that segmenting a tube with condensation on the outer surface leads to a smaller thermal resistance, and generates design criteria for the performance of multi-tube designs.