Trajectories of Social Role Occupancy and Health: An Intra-Individual Analysis of Role Enhancement, Strain, and Context 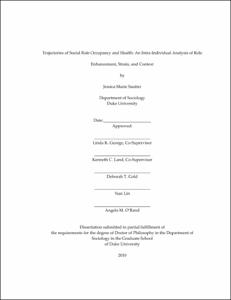 This study examines whether trajectories of multiple social role occupancy, measured by level and dynamics of spouse, parent, and worker roles, are associated with mortality and concurrent trajectories of depressive symptoms and self-rated health. I frame hypotheses with role strain, role enhancement, role context, stress process, and life course theories to examine both within-person changes over age and between-person predictors of health status.

I use data from the Americans' Changing Lives Study, a nationally representative accelerated cohort panel study of U.S. adults interviewed in 1986, 1989, 1994, and 2001/2 with mortality tracking through 2006. I use latent class analysis to estimate disaggregated trajectories of role occupancy, role strain, role satisfaction, depressive symptoms, and self-rated health across the adult life course. I then use multinomial and logistic regression analyses to examine associations between role trajectories and health outcomes.