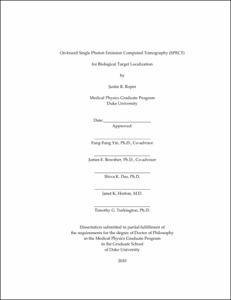 On-board imaging is useful for guiding radiation to patients in the treatment position; however, current treatment-room imaging modalities are not sensitive to physiology - features that may differentiate tumor from nearby tissue or identify biological targets, e.g., hypoxia, high tumor burden, or increased proliferation. Single photon emission computed tomography (SPECT) is sensitive to physiology. We propose on-board SPECT for biological target localization.

Typically targets of 6:1 activity were localized as accurately using 4-minute scans as those of 3:1 activity using 20-minute scans. This trend is consistent with the relationship between contrast and noise in the contrast-to-noise ratio (CNR) and implies that higher contrast targets are better candidates for on-board SPECT because of time constraints in the treatment room. Using 4-minute scans, mean localization errors were within 2 mm for superficial targets of 6:1 activity that were proximal to the detector trajectory and of at least 14 mm in diameter. Localization was significantly better (p < 0.05, Wilcoxon signed-rank test) with than without observer normalization and DRC at 5 of 6 superficial tumor sites. Observer normalization improved localization substantially for a target proximal to the much hotter heart. Localization error patterns were shown to be anisotropic and dependent on target position relative to the detector trajectory. Detector views of close approach and of minimal attenuation were predictive of directions with the smallest (magnitude) localization bias and precision. The detector trajectory had a substantial effect on localization performance. In scanner-acquired SPECT images, mean localization errors of a 22-mm-diameter superficial target were 0.8, 1.5, and 6.9 mm respectively using proximal 180°, 360°, and distal 180° detector trajectories, thus demonstrating the benefits of using a proximal 180° detector trajectory.

In conclusion, the potential performance characteristics of on-board SPECT were investigated using computer-simulation and real-detector studies. Mean localization errors < 2 mm were obtained for proximal, superficial targets with diameters >14 mm and of 6:1 activity relative to background using scan times of approximately 5 minutes. The observed direction-dependent localization errors are related to the detector trajectory and have important implications for radiation therapy. This works shows that parallel-hole SPECT could be useful for localizing certain biological targets.