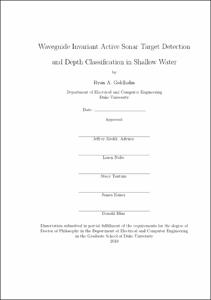 Reverberation and clutter are two of the principle obstacles to active sonar target detection in shallow water. Diffuse seabed backscatter can obscure low energy target returns, while clutter discretes, specific features of the sea floor, produce temporally compact returns which may be mistaken for targets of interest. Detecting weak targets in the presence of reverberation and discriminating water column targets from bottom clutter are thus critical to good performance in active sonar. Both problems are addressed in this thesis using the time-frequency interference pattern described by a constant known as the waveguide invariant which summarizes in a scalar parameter the dispersive properties of the ocean environment.

The ability to discriminate between water column targets and clutter discretes is vital to maintaining low false alarm rates in active sonar. Moreover, because of the non-stationarity of the active sonar return, classification is most typically achieved using a single snapshot of test data. As an aid to classification, the waveguide invariant property is used to derive multiple snapshots by uniformly sub-sampling the short-time Fourier transform (STFT) coefficients of a single ping of wideband active sonar data. The sub-sampled target snapshots are used to define a waveguide-invariant spectral density matrix (WI-SDM) which allows the application of adaptive matched-filtering based approaches for target depth classification. Depth classification is performed by a waveguide-invariant minimum variance filter (WI-MVF) which matches the observed WI-SDM to depth-dependent signal replica vectors generated from a normal mode model. Robustness to environmental mismatch is achieved by adding environmental perturbation constraints (EPC) and averaging the signal replica vectors over the unknown channel parameters. Simulation and real data results from the SCARAB98, CLUTTER07, and CLUTTER09 experiments in the Mediterranean Sea are presented to illustrate the approach.