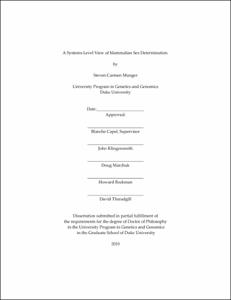 Pathologies of sexual development are common in humans and reflect the precarious processes of sex determination and sexual differentiation. The gonad forms as a bipotential organ, and recent results from the Capel lab revealed that it is initially balanced between testis and ovarian fates by opposing and antagonistic signaling networks. In XY embryos, this balance is disrupted by the transient expression of the Y-linked gene, Sry, which activates genes that promote the testis pathway and oppose the ovarian pathway. While the roles of a few genes have been defined by mutation, current evidence suggests that the interactions of many genes and signaling pathways are involved in the establishment of sexual fate. For example, most cases of disorders of sexual development (DSDs) are unexplained by mutations in known sex determination genes. In addition, recent microarray studies in the mouse revealed that nearly half the transcriptome is expressed in the gonad at the time of sex determination (Embryonic day 11.5, or E11.5), and as many as 1,500 genes are expressed in a sexually dimorphic pattern at this early stage. Thus the sexual fate decision in the developing gonad likely depends on a complex network of interacting factors that converge on a critical threshold.

To begin to elucidate the transcription network topology underlying sex determination, we exploited two inbred mouse strains with well-characterized differences in sex reversal. The common inbred strain C57BL/6J (B6) is uniquely sensitive to XY male-to-female sex reversal in response to a number of genetic perturbations, while other strains, including 129S1/SvImJ (129S1) and DBA/2J (D2) are resistant to sex reversal. We hypothesized that these strain differences in gonad phenotype likely result from underlying expression differences in the gonad at the critical timepoint of E11.5. Using microarrays, we identified significant, reproducible differences in the transcriptome of the E11.5 XY gonad between B6 and 129S1 indicating that the reported sensitivity of B6 to sex reversal is consistent with a higher expression of a female-like transcriptome in B6 XY gonads. Surprisingly, a well-characterized master regulator of the testis pathway, Sox9, was found to be upregulated in the sensitive B6 background, which may serve as a compensatory mechanism to counteract the female-leaning transcriptome and activate the testis pathway in wild type B6 XY gonads.

We extended our expression analysis to a large set of F2 XY gonads from B6 and 129S1 intercrosses. From each pair of gonads, we analyzed the expression of 56 sex-associated genes by nanoliter-scale quantitative RT-PCR (qRT-PCR). The expression levels of most genes were highly variable across the F2 population, yet strong correlations among genes emerged. We employed a First-Order Conditional Independence (FOCI) algorithm to estimate the F2 coexpression network. From this unbiased analysis of XY expression data, we uncovered two subnetworks consisting of primarily male and female genes. Furthermore, we predicted roles for genes of unknown function based on their connectivity and position within the network.

To identify the genes responsible for these strain expression differences, we genotyped each F2 embryo at 128 single nucleotide polymorphisms (SNPs) located evenly throughout the 19 autosomes and X chromosome. We then employed linkage analysis to detect autosomal regions that control the expression of one or more of the 56 genes in the F2 population. These regions are termed expression quantitative trait loci, or eQTLs. We identified eQTLs for many sex-related genes, including Sry and Sox9, the key regulators of male sex determination. In addition, we identified multiple prominent trans-band eQTLs that controlled the expression of many genes. My work represents the first eQTL analysis of a developing vertebrate organ, the mouse gonad. This systems-level approach revealed the complex transcription architecture underlying sex determination, and provides a mechanistic explanation for sensitivity to sex reversal seen in some individuals.